The Soya is a limited express service operated by JR Hokkaido that runs between Sapporo and Japan’s most northerly city of Wakkanai. Currently the Soya runs just one return service per day. 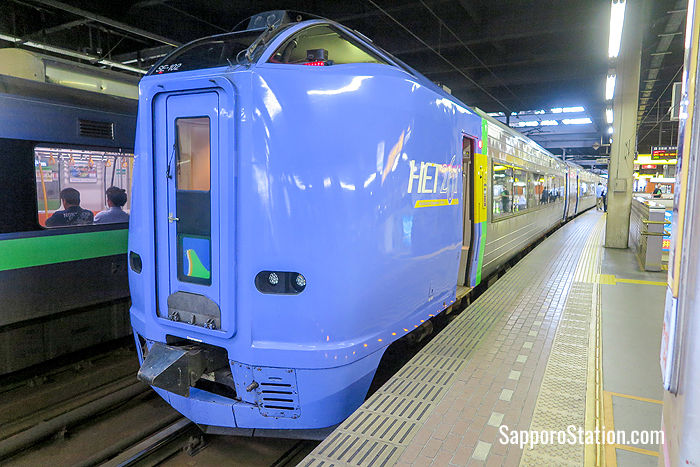 The name Soya is taken from a regional place name in the indigenous Ainu language which is used for Cape Soya and also for Soya Subprefecture. This name has also been given to the Soya Main Line along which the Soya limited express service travels. The Limited Express Soya is fully covered by the Japan Rail Pass.

The Soya travels along the Hakodate Main Line and the Soya Main Line and stops at the following stations. However, only the train bound for Wakkanai stops at Bibai and Sunagawa.

The key destinations are listed below with non-reserved train fares and example journey times given from Sapporo. 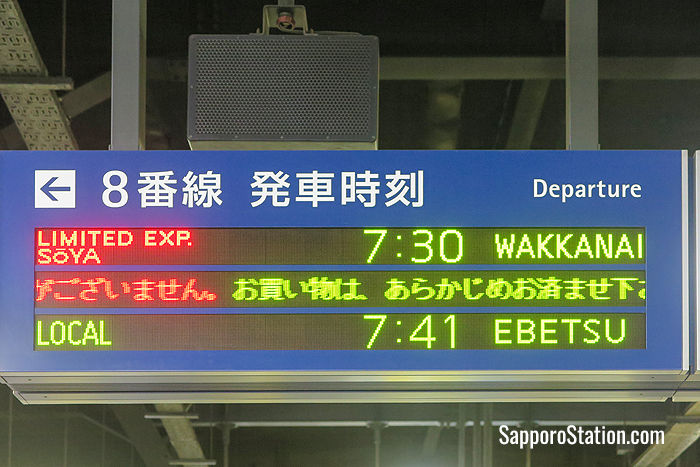 Sapporo is the capital of Hokkaido and its biggest city. Here you will find a great range of shopping, dining, and entertainment opportunities alongside historic buildings and museums. Sapporo’s top attractions include the 19th century Sapporo Clock Tower (also called Sapporo Tokeidai), the Sapporo Beer Museum and Garden, the Susukino entertainment district, Mount Moiwa Ropeway, and Hokkaido University Museum which has exhibits on science, natural history, and the history of the university. In February Sapporo hosts the annual Snow Festival during which ice sculptures and giant snow statues can be viewed at various sites around the city.

Transfers can be made here to local services on the Hakodate Main Line, Chitose Line and Gakuen-Toshi Line. This station also has limited express services for Hakodate, Asahikawa, Abashiri, Kushiro, Obihiro and Muroran, and rapid services for Niseko, Otaru and New Chitose Airport.

Iwamizawa is a good base for exploring rural Hokkaido and has several tourist attractions.

Hokkaido Greenland is an amusement park with 46 rides including Hokkaido’s longest roller-coaster and its tallest Ferris wheel.

Hosui Winery is open from April to November for tours and wine tasting.

Iwamizawa Park has a rose garden and a local history and science museum which includes a planetarium.

Log Hotel Maple Lodge is natural hot spring spa resort that can be enjoyed by day trippers as well as overnight guests.

Kobushi Kiln is a family-run ceramics business with the oldest kiln in Hokkaido which dates from 1946. Tours of the kiln and handmade pottery making workshops are available but should be booked in advance with the Southern Sorachi tour company.

Asahikawa is the second largest city In Hokkaido and a good location from which to visit Daisetsuzan National Park or the lavender fields of Furano. Within Asahikawa there are several interesting tourist spots that can be easily accessed from the station area.

Asahiyama Zoo has animals from several continents including leopards and red pandas from Asia, South American flamingoes, African chimpanzees, and Arctic reindeer. The layout of the zoo is designed to allow visitors safe but close-up views of the animals in habitats resembling their natural environment. Buses from Asahikawa Station take 40 minutes to reach the zoo while a taxi ride will take about 30 minutes.

Otokoyama Sake Brewery Museum displays traditional sake making methods and has a gallery of Ukiyo-e woodblock prints showing the sake making process. Facilities include a shop with a sake sampling corner. Entrance to the museum is free and it is a 20 minute taxi ride from Asahikawa Station.

Kita-no-Arashiyama is a craft village with several workshops and galleries featuring pottery, glass, woodwork, and dyed materials. Visitors can take part in pottery and glass making workshops and also take part in a traditional tea ceremony. To get to the village from the station take the number 3 or 33 bus for 20 minutes.

Nayoro City is famous for its starry skies as it suffers very little light pollution. Nayoro’s Kitasubaru Astronomical Observatory has one of the largest telescopes in Japan with a 1.6m diameter. The observatory’s facilities include a digital planetarium and a lecture room which also hosts live music concerts. The observatory is a 13 minute taxi ride from Nayoro Station.

Nayoro’s Kitaguni Museum has exhibits on local history and natural history and an outside display of the SL Kimaroki; a train which includes a Class 9600 steam locomotive, a rare Maclay snow-spreading car, and a rotary snowplow. The museum is a 15 minute walk from the station. Nayoro’s Sun Pillar Park is named after a local winter phenomenon which occurs when ice crystals in the air cause pillars of sunlight to appear. The park is also popular for its sunflower fields in July and August. From Nayoro Station, the park is a 20 minute bus ride or 10 minutes by taxi.

Horonobe’s main attraction is the Horonobe Reindeer Ranch. These reindeer were originally imported from Finland and bred for their meat and leather, but over time they have become a tourist attraction. In May you can see baby reindeer, and through the warmer months you can view and feed the animals. However, the best time to go is in the winter when you can enjoy sleigh rides and be pulled by reindeer through the snow.

Toyotomi Onsen is a small spa resort area which is known for its natural hot spring waters which are slightly oily and good for the skin. Toyotomi Fureai Center is a public bathhouse which is a 10 minute bus ride from Toyotomi Station. There are also some hot spring spa hotels and a ski resort nearby.

Toyotomi is also a good base for exploring the natural scenery of the Sarobetsu Plain which is part of the part of Rishiri-Rebun-Sarobetsu National Park. Sarobetsu Wetland Center is a 9 minute bus ride from Toyotomi Station and has information and displays about the history and natural history of the area. Close by the Center is Sarobetsu Gensei-kaen (also called “Sarobetsu Primeval Flower Park”) which is a large area of wild flowers crossed by wooden walkways. Miyanodai Observation Deck is a good location from which to enjoy views over the plain. To reach the observation deck, take a local train to Tokumitsu Station and then walk east for 15 minutes.

Wakkanai Komadori Ski Resort is a 7 minute taxi ride from this station.

Wakkanai is the most northerly city in Japan and enjoys spectacular scenery as well as some interesting monuments and museums.

Wakkanai’s best known landmark is the Breakwater Dome which dates from 1936 but is modelled after an ancient Roman arcade and has 70 elegant classical columns. The Breakwater Dome is a 9 minute walk from Wakkanai Station. 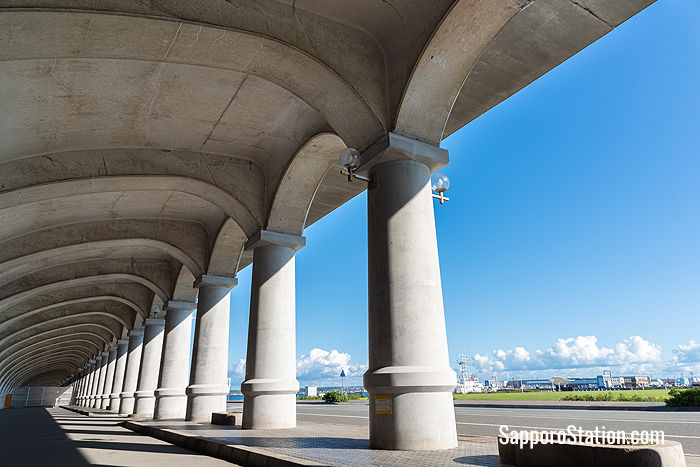 Cape Soya is a popular attraction in Wakkanai as it is Japan’s northernmost point and on a clear day it is possible to see the Russian island of Sakhalin from this location. There are number of monuments at the cape which include the triangular Monument of Japan’s Northernmost Point, a Monument of Peace, and a statue of the explorer Mamiya Rinzo (1775 – 1844). Cape Soya can be accessed by taxi, bus, or rental car and is a 30-40 minute drive from central Wakkanai.

Wakkanai Karafuto Museum is on the 2nd floor of the Fukuko Market building and a 14 minute walk from the station. Here you can learn all about the history of the former prefecture of Karafuto in southern Sakhalin which was the most northern territory of Japan until the end of World War 2. The market itself sells seafood and souvenirs. There is also a restaurant section and a natural hot spring bath in the market building.

The Centennial Memorial Tower in Wakkanai Park is an observation point with views over Wakkanai city and the sea. The tower also includes a museum with exhibits related to the history of Wakkanai, Karafuto, and the explorer Mamiya Rinzo. Wakkanai Park is a 5 minute walk from Wakkanai Station, but it will take longer to climb the hill up to the tower.

Wakkanai is a good base for visits to the islands of Rebun and Risshiri which together form part of the Rishiri-Rebun-Sarobetsu National Park. Both islands are known for their alpine flowers, beautiful natural scenery, and trekking routes. The Wakkanai Ferry Terminal is a 10 minute walk to the east of Wakkanai Station and Heartland Ferry runs regular services to both islands. There is also an International Ferry Terminal which has irregular summer services bound for Korsakov on Russia’s island of Sakhalin, but a visa is necessary to take this service. 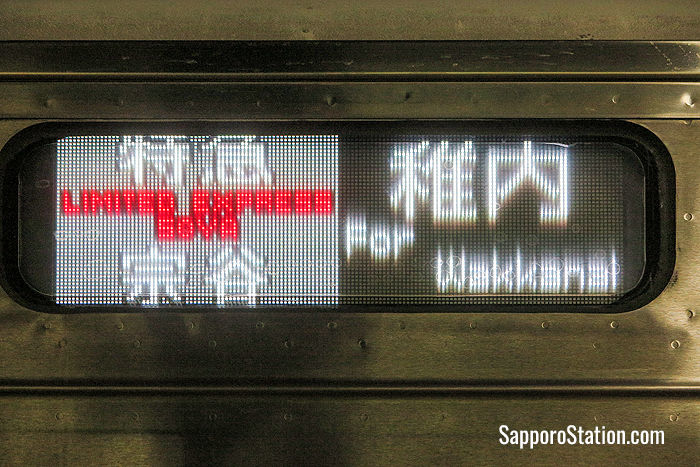 A carriage banner on the Limited Express Soya

An alternative way to travel from Sapporo to Wakkanai is to take the Lilac limited express service from Sapporo as far as Asahikawa and then transfer to the Limited Express Sarobetsu. Both the Lilac and Sarobetsu services are covered by the Japan Rail Pass. The Sarobetsu has two return services each day between Asahikawa and Wakkanai and stops at the following stations.

Both the Soya and Sarobetsu use identical Kiha #261 series 4-car trains. Both services have a Green Car with first class seats in the first car, two cars of reserved seats, and non-reserved seats in the 4th car. All seats are non-smoking.

The timetables below are accurate at the time of writing.

A timetable and route finder, and a downloadable route map can be found on the official JR Hokkaido English language website.