It’s called “Shin Chitose Airport” in Japanese, and the first thing you might notice is how new it looks. Incidentally, “shin” means “new” in Japanese, and after a quarter-century of service, one wonders how much longer that prefix will stick. Probably forever. New Chitose Airport is so well-kept and prosperous that some parts look like they opened yesterday. 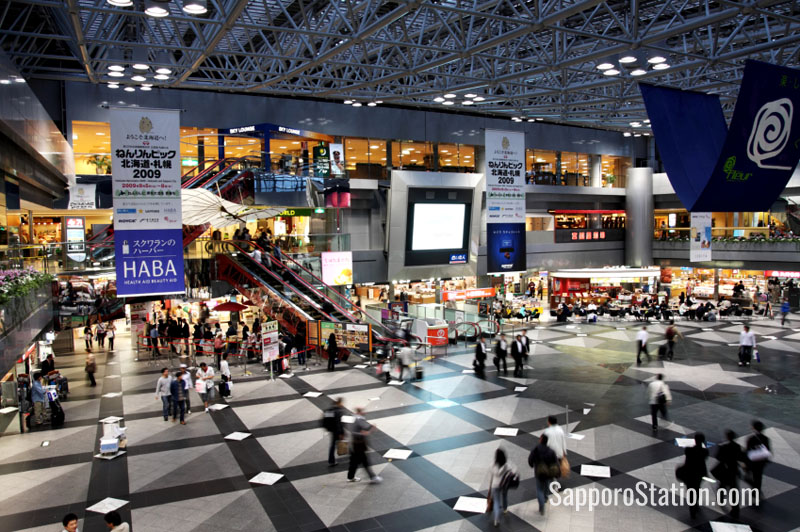 New Chitose (pronounced chi-TOE-say) Airport is a compact hub connecting all of Hokkaido with the rest of Japan. Only about 50 kms (30 miles) from downtown Sapporo (Hokkaido’s largest city), it features the world’s busiest (or second-busiest, depending on how you measure it) air passenger traffic route: Tokyo Haneda – Sapporo Chitose. Around 8 million passengers use it per year – far more than the population of Hokkaido itself! It’s only 90 minutes airborne from Tokyo, and hourly domestic flights (and some irregular international) make Japan’s northernmost island feel less remote than Northern Honshu, Shikoku, or even Kyushu.

The old airport site was ceded to Japan’s Air Self Defense Forces in 1991 (you often see Japanese fighter planes roaring across the sky “Top Gun” style, jousting for airspace). But New Chitose Airport is definitely civilian, as you’ll see when you land, pick your way through the tourists and Tokyo commuters, get your bags within a few minutes (most Japanese airports think keeping people waiting for their bags is a social offense; rightly so!), and comfortably find the trains, buses, and taxis to Sapporo. (The JR train, which takes only 37 minutes to Sapporo Station, is recommended.)

Our guide to Transportation from New Chitose Airport to Sapporo 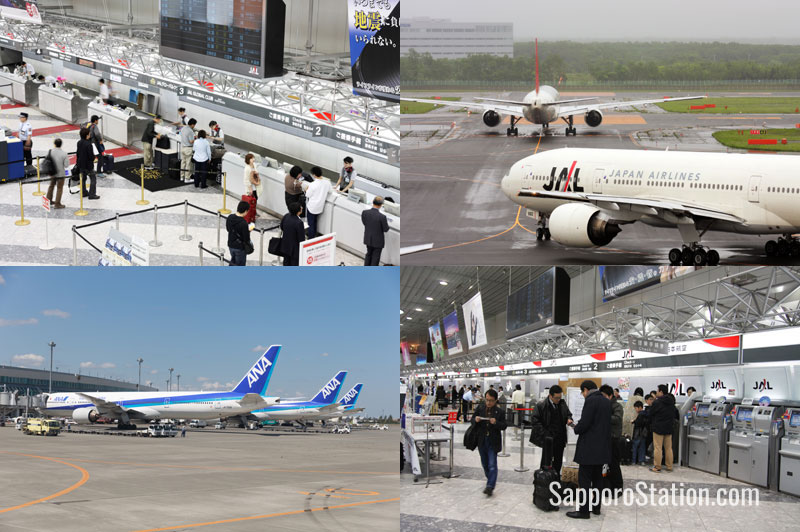 Perhaps the best part about New Chitose Airport is how fast you can transit through it. You can find yourself in downtown Sapporo within an hour of landing, or if departing find yourself on a plane less than 30 minutes after check-in. If you’re using an international airline, Customs and Immigration at Chitose is surprisingly mellow (in contrast to worry-wart Tokyo Narita International Airport, literally designed to be a fortress).

Or, if you like hanging around airports (and I recommend you do so in this case), give yourself an hour before leaving Hokkaido to meander around New Chitose Airports’ very convenient shopping area. Maybe pick up some famous Hokkaido sweets and savories.

Seriously. Japan has a thriving economy for omiyage (presents) that Japanese tourists must buy for co-workers and relatives if they let slip they’re on a trip. (In fact, many families give money to the traveler, called osenbetsu, specifically earmarked for the purchase of swag). How this phenomenon benefits you is that you’ll see palettes of already-wrapped gift boxes (with an open sample displaying their contents) of famous Hokkaido-brand treats in individually-wrapped servings.

Each omiyage box costs around 1000 yen (currently less than US $10), and I recommend you get a dozen or so for people you might have forgotten back home. They’re designed to be light and portable, and you can just shovel them into your suitcase, or into large plastic bags the shops will provide for boarding (the airlines are very tolerant of carry-ons if they are gift bags). So if you’re looking to gift kith and kin, save your last-minute shopping for New Chitose Airport.

I might add that the airport is two very different places depending on Hokkaido’s dichotomous seasons. If you’re escaping mainland Japan’s sweltering summers, you’ll land in Japan’s most temperate zone (best experienced between July and September), where green abounds and Japanese backpackers and foodies vie for cheap rates on short stays. (Travel agencies bundle airfares with hotel rooms, with rates subsidized by the Hokkaido government. Have your travel agent buy your tickets before you arrive in Japan; a domestic connection to Sapporo is often included if you don’t stopover in Tokyo.)

If you’re coming up for Hokkaido’s quite long snowy winters (the Sapporo Snow Festival in early February is recommended, but book your accommodations many months in advance), you’ll see luggage racks packed with skis and snowboards, and cottage-industry shuttle buses waiting by Baggage Claim to cart winter sports fanatics to nearby Niseko, a ski town sporting Hokkaido’s best powder. But expect delays: Most parts of Hokkaido get buried under many meters of snow (hence the Sapporo Snow Festival), and New Chitose Airport is quite used to being inundated and clearing its runways several times a day.

Either way, you’ll be happy you flew into Hokkaido. And so will New Chitose Airport. One nice finishing touch: As your departing plane backs away from the gate, look out the window. Regardless of the weather, the ground staff will line up on the tarmac outside to see you off and wave goodbye. It’s just how they cap off a job well done.

New Chitose Airport – it’s run like airports everywhere should be.