Bus routes run from Sapporo Station to various parts of the city forming a comprehensive network that covers all those areas not already covered by the city’s subway and streetcar systems. In particular these bus routes are convenient for popular tourist locations such as Sapporo Beer Museum, Mount Moiwa Ropeway, and Hitsujigaoka Observation Hill. 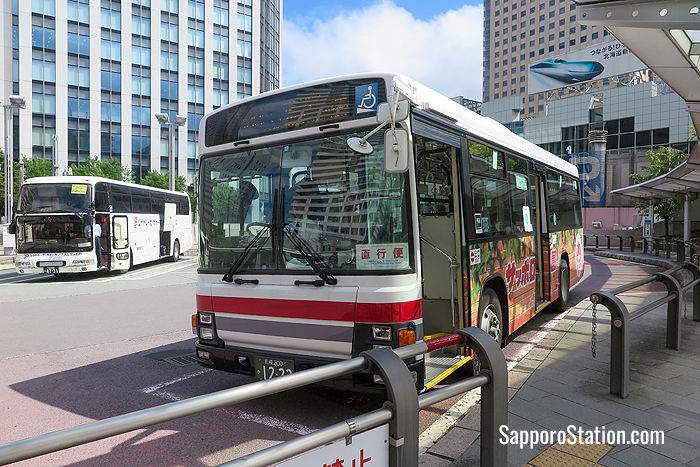 Local route buses in Sapporo are run by three main companies: Hokkaido Chuo Bus, JR Hokkaido Bus, and Jotetsu Bus. However, these three companies generally use the same method to calculate their fares. Bus fares depend on how many stops are traveled, but if you are traveling in central Sapporo it shouldn’t cost more than the base fare of 210 yen for adults and 110 yen for children. 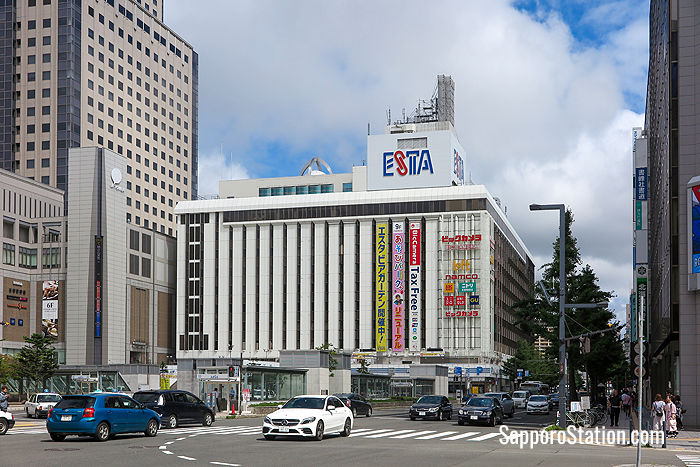 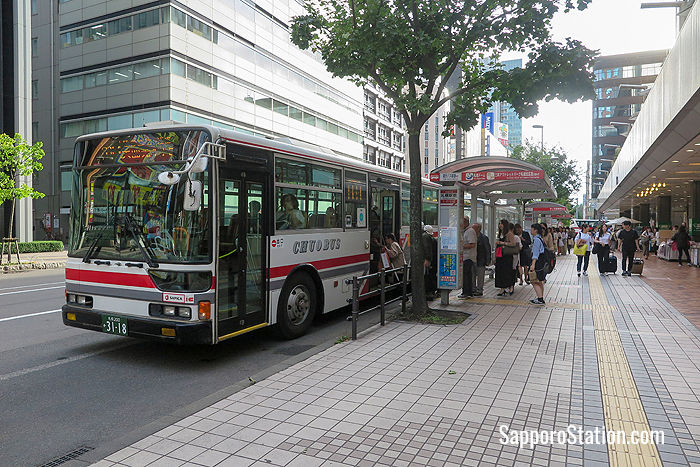 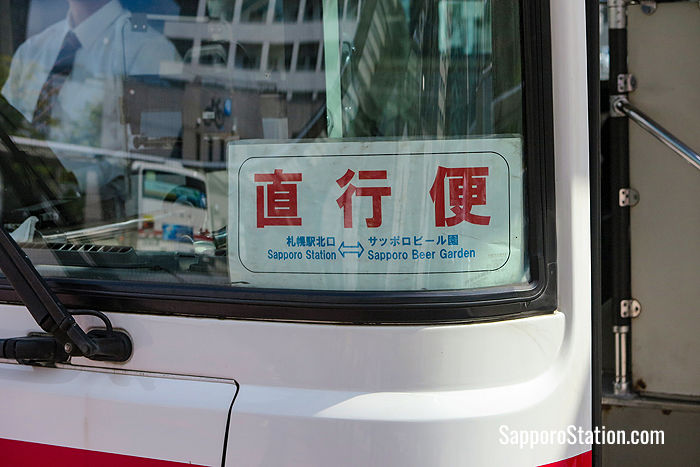 A notice announcing a bus’s destination

Sapporo Beer Museum is one of this city’s top attractions and the easiest way to visit it is to take a direct bus from Sapporo Station. Visitors to the museum can take a free self-guided tour or pay for a tour with a guide. There is also a bar where you can buy beer tasting sets and a museum shop where you can buy all kinds of beer-themed souvenirs. Sapporo Beer Garden is located beside the museum and has several restaurants where you can enjoy all-you-can-eat seafood and lamb barbecue meals accompanied by draft Sapporo beer. To get there take Bus 188 from Bus Stop 2 on the north side of the station building. This bus runs directly to Sapporo Beer Museum in around 7 minutes for a fare of 210 yen. 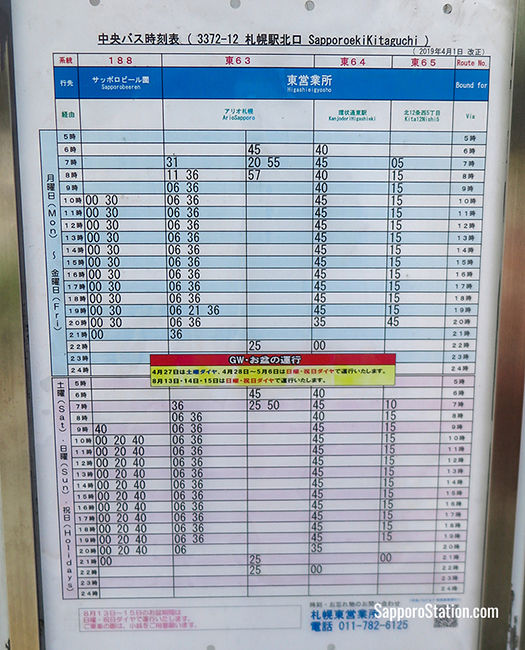 An alternative to traveling directly to Sapporo Beer Museum is to take Bus 88 (also called the “Sapporo Walk Bus”) from Bus Stop 3 which is located outside Tokyu Department Store on the south side of Sapporo Station. This bus also stops at Sapporo Factory on its way to the museum. Sapporo Factory is a large commercial complex which was built on the historic site of Sapporo’s first beer brewery and now has 160 shops and restaurants located in seven interconnected buildings. Among these modern stores the brewery’s original 19th century brick building has been preserved and inside there is a beer museum, beer hall, and craft beer tasting room. Bus 88 takes 7 minutes to reach Sapporo Factory and 14 minutes to reach Sapporo Beer Museum, but the fare for either destination is 210 yen.

Mount Moiwa is one of Sapporo’s most popular sightseeing destinations. The Mount Moiwa Ropeway takes passengers up the mountain to a cable car station. From there you can take the cable car to the observation deck on the mountain’s summit. From the observation deck you can enjoy a fantastic panoramic view and the night view over the city is particularly famous. To reach the Mount Moiwa Ropeway take Bus 50 from Bus Stop 7 inside Sapporo Station Bus Terminal. The bus takes 37 minutes and the fare is 210 yen.

Hitsujigaoka Observation Hill is a famous scenic location which overlooks Sapporo and the Ishikari Plain. There is a bronze statue on the hill of William S. Clark, a 19th century educational pioneer who established Sapporo Agricultural College (now Hokkaido University). Clark is famous in Japan for his advice to his students: “Boys be ambitious!” Facilities at the hill include a public hot spring footbath, a souvenir shop where you can buy ice creams, the Sapporo Snow Festival Museum where you can learn all about the history of the annual winter festival, and the Hitsujigaoka Rest House where you can enjoy a jingisukan-style mutton barbecue. To get there take Bus 89 from Bus Stop 2 outside Tokyu Department Store on the south side of Sapporo Station. The bus takes 38 minutes to reach Hitsujigaoka and the fare is 240 yen.

Mitsui Outlet Park is a large discount shopping mall with over 180 stores selling a wide range of international brands and local souvenirs at bargain prices. To get there take Bus 100 from Bus Stop 1 which is located outside Tokyu Department Store on the south side of Sapporo Station. The bus takes 50 minutes and the fare is 320 yen. 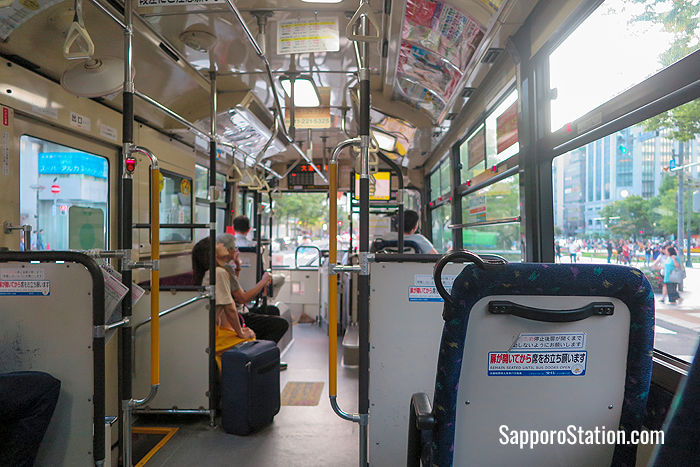 On board a local bus

How to Ride Local Buses in Sapporo

Buses in Sapporo are boarded from the rear door and exited from the front. When you are ready to get off, you can push a stop button to request a stop. Fares can be paid with cash, or with an IC card.

If you intend to pay with cash, take a numbered ticket as you get on the bus from a ticket machine by the entrance. The number on your ticket corresponds to a numbered digital fare chart at the front of the bus. This tells you how much you should pay when you get off. You should put both your ticket and the exact fare into the fare box which is located beside the driver. If you don’t have the exact fare, you can use a change machine located beside the fare box.

Prepaid IC cards can be used on buses in Sapporo. The SAPICA card is the local IC card that can be used on the local bus routes as well as on the streetcar and subway networks. SAPICA can also be used to buy goods from shops and vending machines in Sapporo that display the SAPICA logo. This card can be bought from bus terminal ticket offices or from subway ticket machines. However, you cannot buy it on board buses or streetcars. SAPICA can only be used in Sapporo, but there are other regional IC cards that can be used in Sapporo and throughout the country. The following IC cards can all be used on Sapporo’s local bus networks as well as on the streetcar and subway: Kitaca (JR Hokkaido), Suica (JR East), PASMO, manaca, TOICA, PiTaPa, ICOCA, Hayakaken, nimoca, and SUGOCA.

Jotetsu Bus run a 100 yen bus service between Sapporo Station and Susukino which also makes a stop in the Odori area on the way. Adults are charged just 100 yen to ride this bus and the fare for children is just 50 yen. These buses run regularly between 6.45 and 23.10 from bus stops 9 and 12 in the Sapporo Station Bus Terminal.

The Sapporo Walk Bus and Chuo Bus One Day Pass

The Sapporo Walk Bus (Bus 88) is a useful circuit bus operated by Hokkaido Chuo Bus Company that stops at several popular tourist locations in central Sapporo. As written above, this bus runs from Sapporo Station to Sapporo Beer Museum via Sapporo Factory. On the way back from Sapporo Beer Museum it returns via Sapporo Factory, Odori Park, and Sapporo Clock Tower before returning to Sapporo Station. Buses on this route are very regular as they run roughly every 20 minutes. If you plan to use this bus several times in one day, you can save money by buying a One Day Bus Pass. This pass gives you unlimited rides on this route and costs just 750 yen for adults or 380 yen for children. You can also use this bus pass for other Chuo Bus routes in central Sapporo. This pass can be bought on board the Sapporo Walk Bus from the driver, or you can buy it in advance from the Chuo Bus Regular Sightseeing Bus Counter on the 2nd floor of Sapporo Station Bus Terminal. Once you have the pass you can just show it to the driver as you get off the bus. 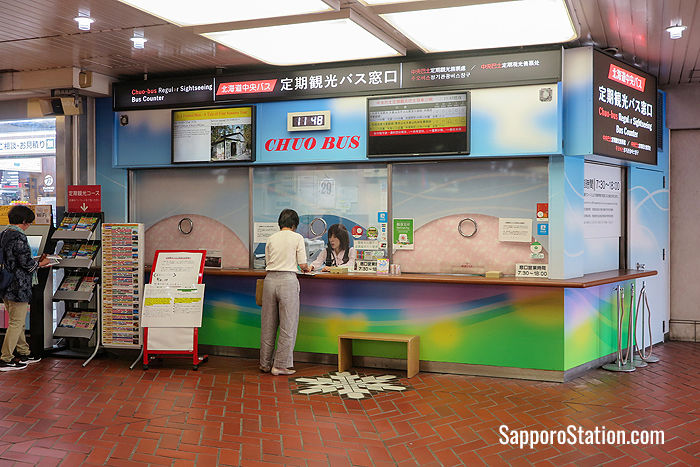 A number of sightseeing bus tours run from Sapporo Station Bus Terminal to locations on the outskirts of Sapporo.

Jotetsu Bus operate regular bus services to hot spring resorts near Sapporo that include Jozankei Onsen, Hoheikyo Onsen, and Kogane-yu. A Jotetsu One-Day Pass is available that covers all these destinations and it costs 2,200 yen for adults and 1,100 yen for children. For more details visit the Jotetsu website. These services depart from Bus Stop 12 in Sapporo Station Bus Terminal and the Joetsu Bus ticket office is located beside this stop. 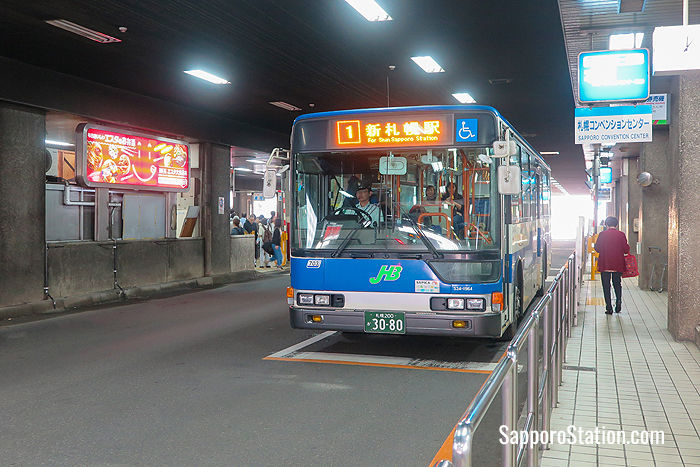 Hokkaido Chuo Bus operate a number of regular half-day and one-day sightseeing bus tours that take in several popular locations inside and outside Sapporo. In Sapporo these include:

Chuo Bus sightseeing tours outside of Sapporo include day trips to the picturesque port of Otaru, the scenic countryside around Lake Shikotsu and Lake Toya, summertime trips to view the lavender fields of Furano, and autumn trips to Mount Kurodake and Sounkyo Gorge to view the fall foliage.

Chuo Bus regular sightseeing buses depart from Bus Stop 17 and 18 in Sapporo Station Bus Terminal. To find out more details about these tours or to reserve your seats, go to the Chuo Bus Regular Sightseeing Bus Counter on the 2nd floor of Sapporo Station Bus Terminal. You can also find more information and make reservations on the Chuo Bus website.