Sapporo has a year-round tourist economy with peaks in summer and especially winter. For more than sixty years, Sapporo has hosted its annual Snow Festival, attracting around two million visitors during the first week of February. So if you are looking to stay someplace central, with easy transit to and from the airport and around the city, JR Sapporo Station is probably your best bet.

There are nearly 100 places to stay within two subway stops, but this article gives you an overview of a few notable ones within easy walking distance of both the station and local downtown sights. 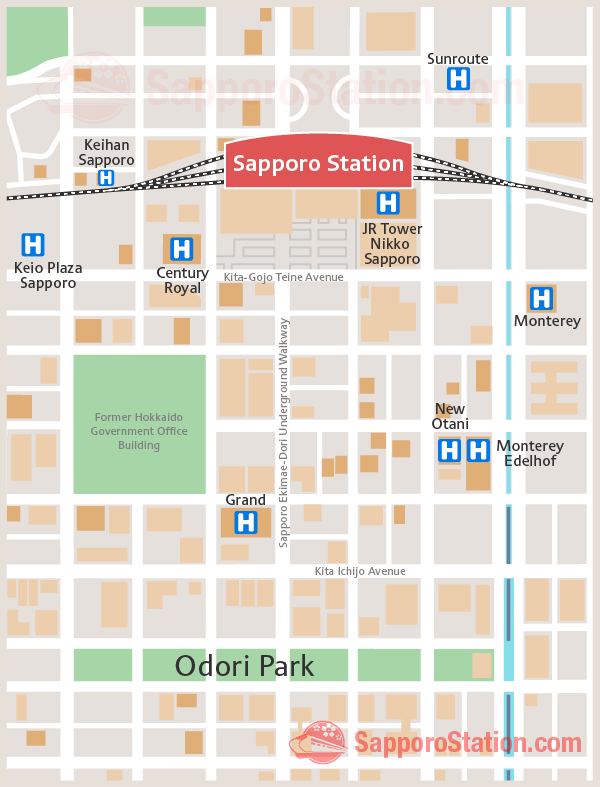 Price estimates below assume you are traveling as a couple staying in a double room (with one bed), and are quoted at the high-end before any discounts from online bookings (which generally offer significant savings). Prices may also vary by season, and holiday period. We also note whether the walk to the hotel is above or below ground, since Sapporo sidewalks can be tricky to navigate in icy wintertime.

The hotel is the tallest building in the area, and offers gorgeous night views of the city from just about any room (rooms facing west also overlook mountains).

Although the interior of the rooms themselves are relatively unremarkable for the price, the presumption is that you won’t be staying in them much anyway, with all the attractions nearby: fancy restaurants, bars, and public baths on the top floors, a cornucopia of shopping surrounding JR Sapporo Station, and a staff determined to show everyone that Sapporo is a world-class city. If you have the money, a stay here is an experience.

Distance from JR Sapporo Station: Within the station itself.

When the JR Tower Hotel opened in 2003, the Century Royal Hotel positioned itself as the contending luxury hotel of note, offering competitive prices, services, restaurants, and city views for customers willing to sacrifice the cachet of staying someplace more opulent. As Japanese hotel rooms go, they are slightly larger than average.

The Keio Plaza Hotel is a long-standing institution in Sapporo with its expansive lobby and odd nooks and crannies of stores and conference areas. It somehow manages to integrate the best of Hokkaido’s tourism industry with Sapporo’s in-crowd: business meetings take place cheek-by-jowl with family gatherings, local weddings, and weekend adventurers from Tokyo ready to take on Sapporo’s nightlife and nearby nature. It’s a place that manages to feel relatively fancy without coming off as snobby.

This relic of a bygone era, when there weren’t many other places in Sapporo offering visiting foreign dignitaries a commensurate place to stay, the Sapporo Grand Hotel has an archive proudly displaying the signatures of its former patrons, including British Prime Minister Margaret Thatcher (who took the time to compliment the food). Founded in 1934 as Hokkaido’s first “Western-style” hotel and proud of its service and amenities, the hotel is conveniently located closer to Odori Park than JR Sapporo Station.

It actually looks like a hotel from the outside. Most hotels in Japan are boxy skyscrapers, but the Hotel Monterey looks lovely both outside and in (with the best-looking lobby and interior in town). The rooms tend to be on the small side, but what it lacks in space it makes up for with style.