The Namboku Line is a subway line in Sapporo that runs between Asabu Station in the north of the city and Makomanai Station in the south. Along the way this line connects important areas of the city such as Sapporo Station, Odori Park, the Susukino entertainment district, and Nakajima Park. Most of this line is underground, but after Hiragishi Station the stations and tracks are above-ground. 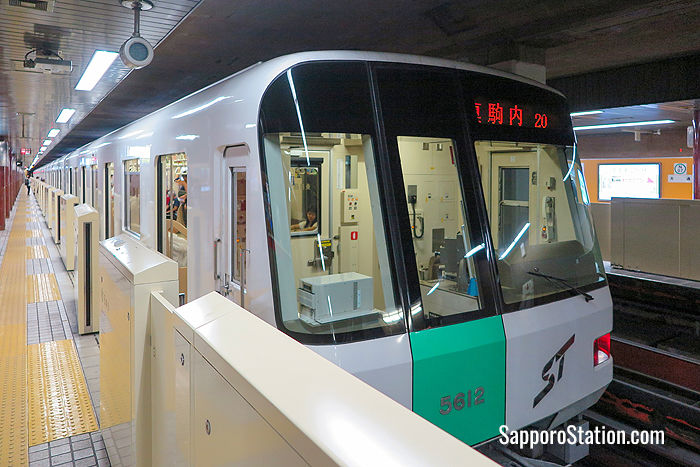 A Sapporo subway train on the Namboku Line

This is one of three subway lines in Sapporo that are operated by Sapporo Municipal Subway. The others are the Tozai Line, and the Toho Line. The Namboku Line connects with the Toho Line at Sapporo Station and all three lines meet at Odori Station. On station maps and signage the Namboku Line is color-coded green. 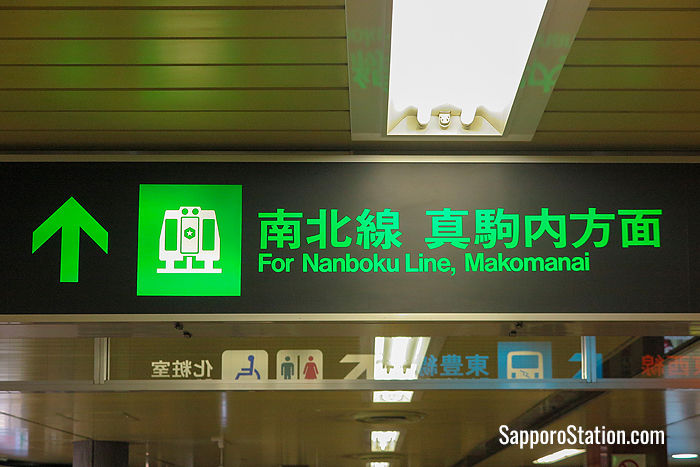 The Namboku Line runs through the Kita, Chuo, Toyohira, and Minami wards of Sapporo and has 16 stops.

The key destinations are listed below with example fares and journey times given from Asabu.

This station is convenient for Sapporo Asabu Baseball Stadium. 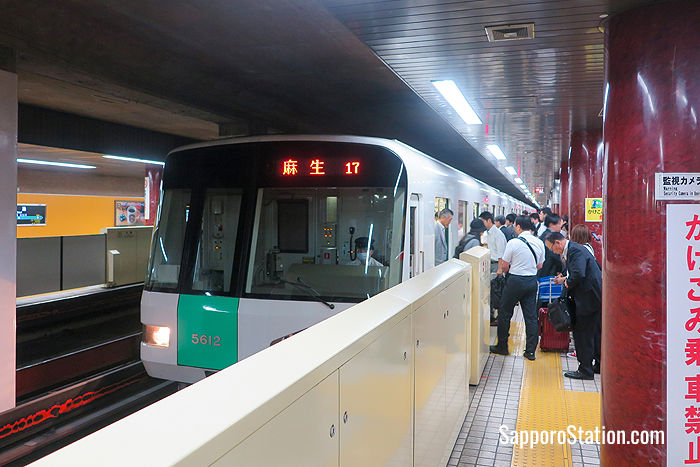 Passengers boarding a train for Asabu

This station is a 15 minute walk from Mikaho Gymnasium. Located inside Mikaho Park this indoor sporting arena holds an ice rink in the winter months and has a variety of fitness classes and sporting facilities available in the rest of the year. Courts are available for basketball, volleyball, table tennis, and badminton. The park also has tennis courts and a baseball field.

This station is convenient for the Sapporo Campus of Hokkaido University and for Hokkaido University Museum. The university campus is famous for its leafy tree-lined ground and historic buildings and the museum has exhibits related to both the history of the university and to the general history and culture of Hokkaido. Both the campus grounds and the museum are completely free to enter.

Sapporo Station is a major hub for shopping and dining with several department stores and shopping centers including Daimaru, Bic Camera, Tokyu, and Stellar Place. A big attraction in this area is the Sapporo JR Tower, a 38-story skyscraper with an observation deck on its top floor. The historic red brick Old Hokkaido Government Building (nicknamed Akarenga Chosha) is also an 8 minute walk from this station.

Odori Station is located in Sapporo’s central business district and many hotels, shopping and dining facilities are located in this area. The station is located right beside Odori Park which is a both a pleasant green space and a center of local events. Every February the park is one of the settings for the Sapporo Snow Festival and is filled with massive snow statues. A Lilac Festival is held in the park each May and beer gardens are set up in the summer. Inside the park and a short walk from the station is the 150 meter tall Sapporo TV Tower. The tower has observation deck from which there are pleasant views of both the park and the surrounding city. 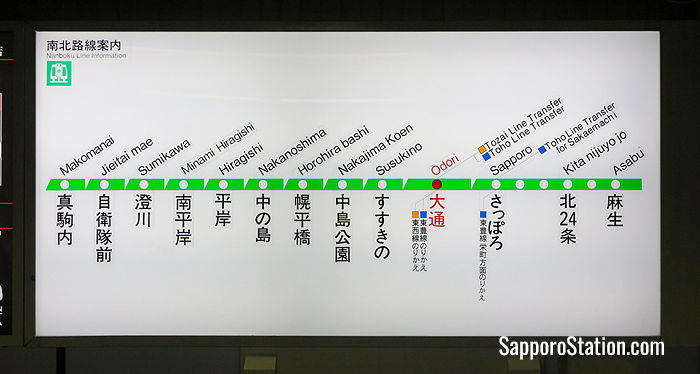 Sapporo Clock Tower, a famous 19th century wooden building, is a 3 minute walk north of Odori Station. Tanukikoji Shopping Arcade and Nijo Fish Market are both located a 4 minute walk to the south.

Transfers can be made at Odori Station to the Tozai and Toho subway lines. Exit 10 of the station is a 1 minute walk from the Nishiyonchome Stop of the Sapporo Streetcar.

Susukino is a brightly lit entertainment and nightlife district packed with bars, clubs, and restaurants. During the Sapporo Snow Festival each February the Susukino area is filled with ice sculptures. Ganso Ramen Yokocho and Shin Ramen Yokocho are two alleyways in Susukino full of noodle shops which offer many different flavors of Sapporo’s specialty miso ramen noodles Ganso Ramen Yokocho (“original ramen alley”) is located 2 minutes to the south of Susukino Station and Shin Ramen Yokocho (“new ramen alley”) is located 1 minute to the east. The Tanukikoji Shopping Arcade is a 4 minute walk to the north of Susukino Station.

This station is located immediately outside Nakajima Park. This is a large park which includes a pond, streams, a Japanese garden and around 5,000 trees. Inside the park are several public buildings including a puppet theater, Sapporo Astronomical Observatory, the Hokkaido Museum of Literature, Sapporo Concert Hall, and Nakajima Sports Center. At the northern end of the park and just 7 minutes on foot from Nakajima-Koen Station is a historic 19th century wooden guesthouse called the Hoheikan which is now open as a museum. Several hotels, including the luxurious Sapporo Park Hotel, are located around the park and overlook its greenery.

The Yamahanakujo Stop of the Sapporo Streetcar is a 6 minute walk west of Nakajima-Koen Station.

Horohira-Bashi Station is located at the south-western edge of Nakajima Park and is named after nearby Horohira Bridge which crosses the Toyohira River. Gokoku Shrine is a pleasant shrine located inside Nakajima Park and just 3 minutes’ walk from the station. The shrine was founded in 1879 to comfort the spirits of soldiers who died two years before in the Satsuma Rebellion. There are many cherry trees on the shrine grounds, so it is a popular cherry blossom viewing spot in the spring.

The Seishugakuen-Mae Stop of the Sapporo Streetcar is a 7 minute walk from Horohira-Bashi Station.

South of this station the Namboku Line tracks are above ground, but covered with shelters to protect them from heavy snowfall. The four stations south of Hiragishi Station are also located above-ground.

Tsukisamu Park is a large park located 12 minutes’ walk to the east of this station. The park has a children’s playground, woodland trails, a boating pond, baseball grounds, a “park golf” course, and tennis courts.

Sapporo Museum Activities Center is a small nature museum located 10 minutes on foot from Sumikawa Station. Exhibits include stuffed animals and specimens, and a reconstructed skeleton of a 7 meter long Sapporo Sea Cow, whose 7 million-year-old fossil remains were found in the nearby Toyohira River in 2002. The museum is free to enter and open Tuesday to Thursday between 10.00 and 17.00.

This station is a 4 minute walk from Sapporo City Transportation Museum. The museum has models, photographs, uniforms, and tickets which help to tell the story of the city’s public transportation system from horse-drawn times to the present day. Outside there are several vintage vehicles including buses, trams, and subway passenger cars. Currently the museum is closed for renovations and is not due to reopen until 2022. However, you can still take a virtual reality tour of the museum online.

Exit here for Sapporo Art Park, a complex of facilities set in a forest that includes a museum displaying the art of local, national and international artists, an outdoor sculpture garden, craft studios, an outdoor stage for musical performances, a restaurant, and café. To reach Sapporo Art Park, take a Chuo bus from Bus Stop 2 outside the station. The bus ride takes around 15 minutes.

The Edwin Dun Memorial Hall is an 8 minute walk from Makomanai Station. This wooden building was built as an office for the American agricultural adviser Edwin Dun in 1880, and is now a free museum.

Makomanai Park is a large park which is a 14 minute walk from Makomanai Station. The park is popular for cherry blossoms in the spring, maple leaves in the autumn and also features some sporting facilities including the tennis courts at the Makomanai Open Stadium and the indoor ice skating rink at Makomanai Ice Arena. Also in the park is Sapporo Salmon Museum, which has educational exhibits, an aquarium, and an observation pond. 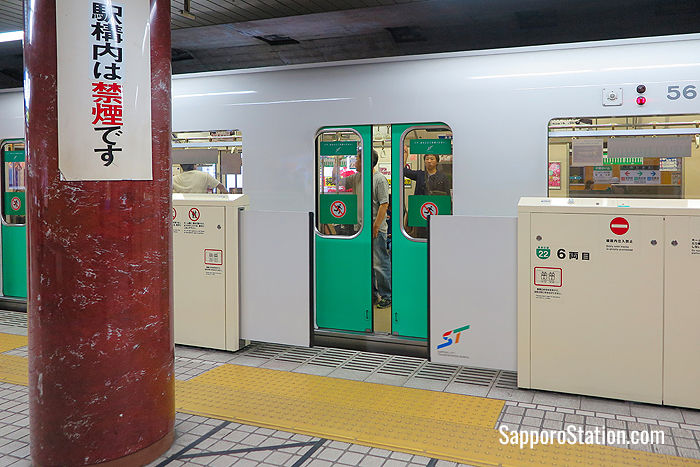 Platform screen doors open only when the train has arrived

All of these tickets can be bought from ticket machines outside the ticket gates of each subway station. IC cards such as the local SAPICA card or other regional cards such as Kitaca, Suica, PASMO, and TOICA, can be used on the subway as well as on Sapporo’s streetcars and bus networks.