The Rapid Airport is a train service that provides a quick and easy link between New Chitose Airport and the major tourist destinations of Sapporo and Otaru. This is a regular and reliable service running approximately every 15 minutes during the day and it is the fastest way to travel between these destinations. The Rapid Airport can cover the distance between the airport and Sapporo in just 37 minutes and reach Otaru from the airport in just 1 hour and 15 minutes. 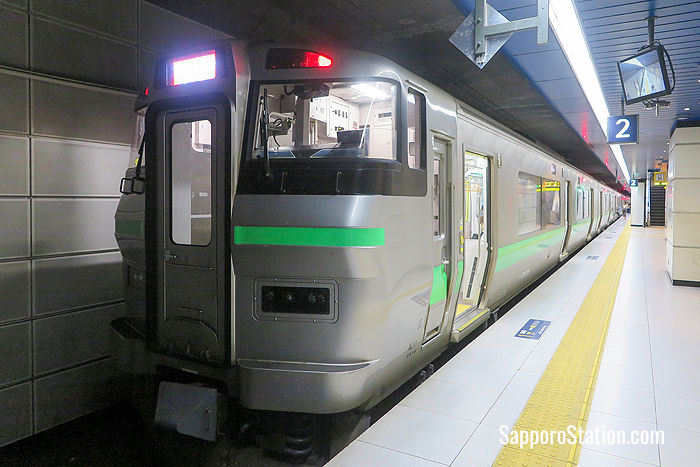 This train is run by JR Hokkaido and so it is completely covered by the Japan Rail Pass. 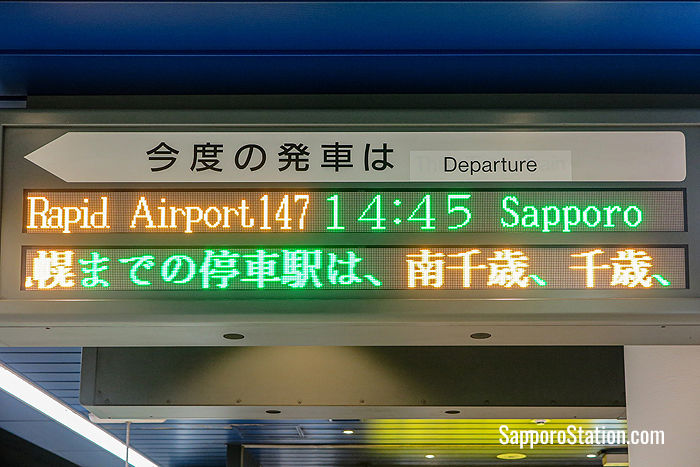 The following stations are the main destinations served by the Rapid Airport service.

All Rapid Airport services serve Sapporo Station, but not all services serve the stations between Sapporo and Otaru. Generally, Rapid Airport trains that start or terminate at Sapporo Station will alternate with those that start or terminate at Otaru Station. This route’s key destinations are listed below with standard non-reserved fares and example journey times given from New Chitose Airport Station. 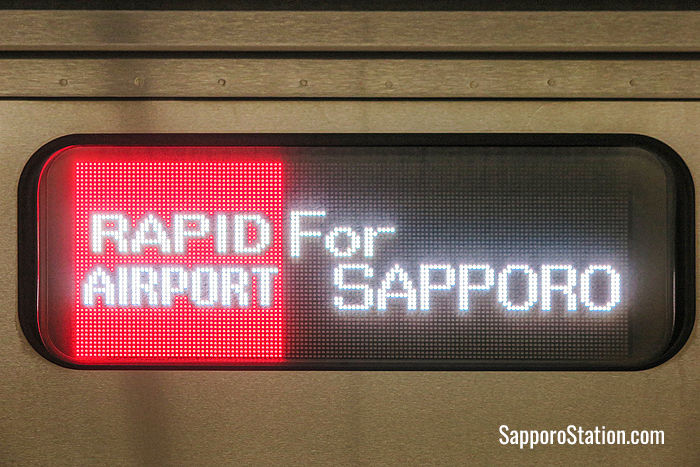 A carriage banner on the Rapid Airport

This station is an underground station that is directly connected to the Domestic Terminal of New Chitose Airport and it is only 10 minutes on foot from the International Terminal. 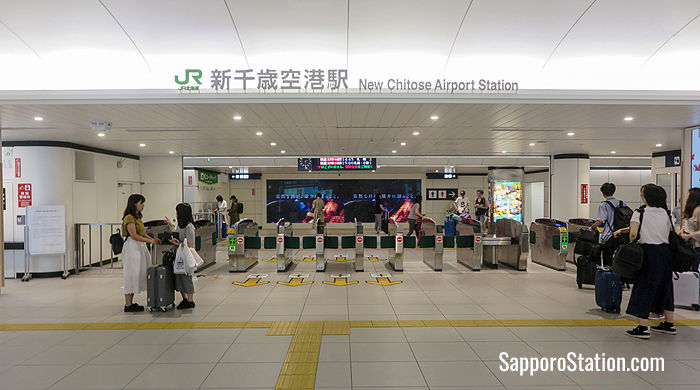 Chitose is a convenient base for visiting Lake Shikotsu, and Shikotsu Onsen.

Lake Shikotsu is a large clear blue lake which is encircled by volcanic mountains. Camping, hiking, canoeing, kayaking, paddle boarding, fishing, and pleasure boat cruises are all popular activities in this area. Shikotsu Onsen is a small hot spring resort area on the eastern shore of the lake. This area is host to the Shikotsu Ice Festival every year from late January to mid-February. During the festival giant ice sculptures are made from the waters of the lake. These sculptures have a blue glow during the day, but at night are illuminated in many colors. The festival also features an ice slide, an ice rink, food stalls, musical performances, and fireworks.

For those who wish to stay in Shikotsu Onsen, Kyukamura Shikotsuko is an old-fashioned inn with hot spring bathing facilities and saunas, that also organizes nature treks, as well as canoeing, and bird watching activities. Also in Shikotsu Onsen, Resort Spa Mizu-no-Uta is a high-end luxury hotel with a hot spring spa, two restaurants, a café and bar, a patisserie, and a hamburger stand. This hotel has a free shuttle service to and from Chitose Station and day trippers are welcome to use the hotel’s bathing facilities. Lake Shikotsu is a 40 minute bus ride from Chitose Station or 30 minutes by car.

Eniwa’s biggest attraction is the agricultural theme park, Ecorin Village. This park features a variety of farmyard animals, gardens, sheep dog shows, sheep races, tractor tours, and the world’s largest tomato plant. A free shuttle bus from the west exit of Eniwa Station will take you there in 15 minutes.

Shin-Sapporo Station is convenient for three of Sapporo’s museums and an aquarium.

Sapporo Science Center is a 6 minute walk from this station. This museum and planetarium has around 200 exhibits related to astronomy, robotics, and Hokkaido’s winter climate.

The Sunpiazza Aquarium is a 5 minute walk from the station inside Sunpiazza Shopping Center. This aquarium features such creatures as Asian otters, spotted seals, rockhopper penguins, and around 1,500 fish.

The Hokkaido Museum is a 15 minute bus ride from the station. This museum explores the history of Hokkaido’s history through the relationship between human culture and the natural world.

All three museums are closed on Mondays, but the aquarium is open 365 days a year.

Sapporo is Hokkaido’s biggest urban center and its capital city. Here you can find historical buildings such as the iconic 19th century Sapporo Clock Tower and the Former Hokkaido Government Office (nicknamed “Akarenga”), great shopping and dining facilities in locations such as Sapporo Factory and Akarenga Terrace, nightlife in the Susukino entertainment district, and the birthplace of Sapporo Beer at Sapporo Brewery Museum and Beer Garden. The city also plays host to the annual Sapporo Snow Festival every February when the streets and parks are decorated with delicate ice sculptures and giant snow statues.

Sapporo Teine Ski Resort can be accessed by JR Bus 70 from Teine Station’s south exit. Sapporo Teine is the biggest ski resort near Sapporo and has a variety of trails suitable for all levels of ability. The bus takes about 16 minutes to get to the resort’s Olympia Zone and a further 12 minutes to reach the Highland Zone (which has the more advanced trails). This resort’s ski season lasts from November through to early May.

Otaru is a picturesque port town with many perfectly preserved historic buildings which now house art galleries, museums, craft shops, antique shops, and delicious seafood restaurants. A key sightseeing area is the Otaru Canal which is lined with historic buildings and where visitors can enjoy canal boat cruises and rickshaw tours. Other attractions include the stained glass and art nouveau galleries of Otaru Art Base, the Otaru Museum Main Building with its impressive collection of railway vehicles, the Otaru Museum Canal Building with its displays of local history and natural history, the finely crafted glass works of Kitaichi Glass and Taisho Glass Palace, and the Old Aoyama Villa built by a local herring millionaire in 1917. 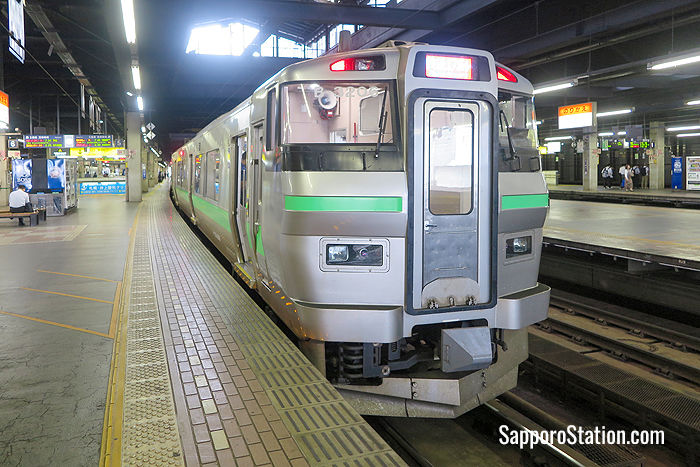 The Rapid Airport at Sapporo Station

About the Rapid Airport

The Rapid Airport is a 6-car train and completely non-smoking. Five cars have non-reserved seating which requires no extra fare, and Car 4 has reserved seating. Reserving a seat in Car 4 costs only 530 yen extra and may be worthwhile if you are carrying large suitcases as this car has large luggage compartments. Car 4’s seating also consists of spacious “u-seats” which are reclinable. This train uses either #721 series electric trains or the newer #733 series. The main difference between these trains is that while the #721 has mainly paired seating in all cars, the #733 has long bench seats in the non-reserved cars and so can feel less crowded. The newer #733 is also easier for wheelchair users as there is no difference in the level between the car floor and the platform. Both trains have a wheelchair space and a universal access toilet in Car 3.

The current schedule for the Rapid Airport service can be downloaded from the official JR Hokkaido website. To plan other rail journeys in Hokkaido, check out JR Hokkaido’s timetable and route finder, and their downloadable route map.