Sapporo Clock Tower (called Sapporo Tokeidai in Japanese) is a picturesque American-style, 19th-century wooden structure in central Sapporo. It is also Sapporo’s oldest building and an essential tourist stop on your visit to this city. The Clock Tower’s history is closely tied up with the early development of Sapporo, and it is now fondly recognized as an important cultural and historical symbol of the city. 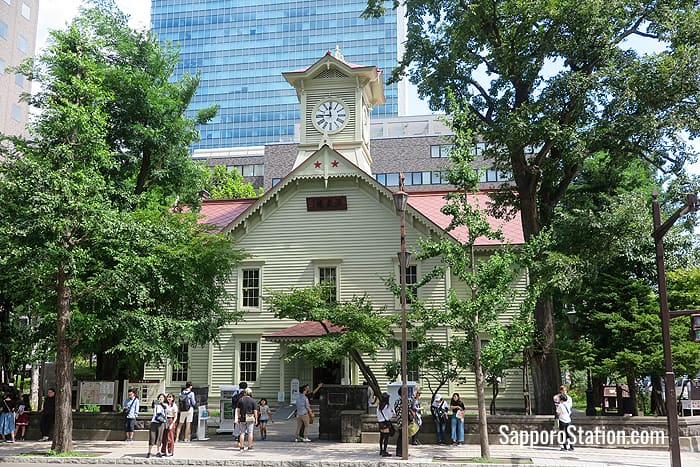 In 1970 the clock tower and its clock were both nationally designated as an Important Cultural Property. The clock itself was also recognized as part of Japan’s Mechanical Engineering Heritage by the Japan Society of Mechanical Engineers in 2009.

The History of Sapporo Clock Tower

Although there was already a small settlement in the area now called Sapporo, and the indigenous Ainu had also long lived in the area, Sapporo’s official beginning is in the year 1868 when the national government decided it was the ideal location for Hokkaido’s new capital city. In the early 1870s the local authorities sought help and advice from the American government in developing Sapporo and the surrounding countryside. One result was the founding of Sapporo Agricultural College in 1875, to educate new settlers in the most up-to-date and efficient farming methods. This college was a predecessor of the modern Hokkaido University. 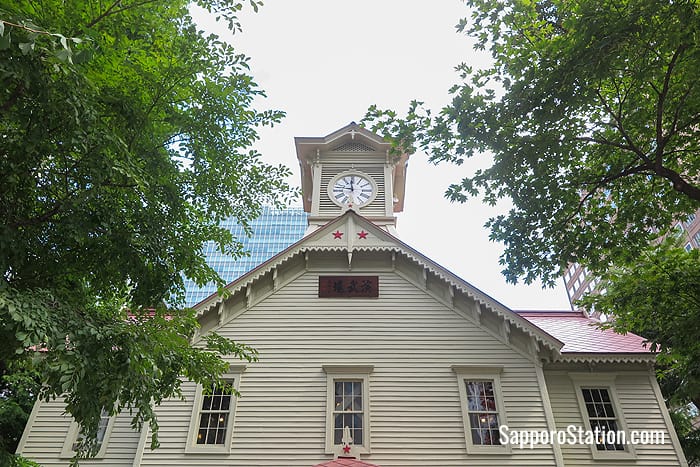 Sapporo Clock Tower was built in 1878 as part of Sapporo Agricultural College. Built in the “Carpenter Gothic” style that was popular in America in the late 19th century, the tower has wooden clapboard outer walls and steep gables that give it a simple yet elegant appearance. At that time, the college also included a dormitory, a north auditorium, a chemistry auditorium, and a library. A weather observatory was also added in 1879. Although these other buildings have long since disappeared, today you can view a diorama inside the Clock Tower building which shows Sapporo Agricultural College as it appeared in the late 19th century. 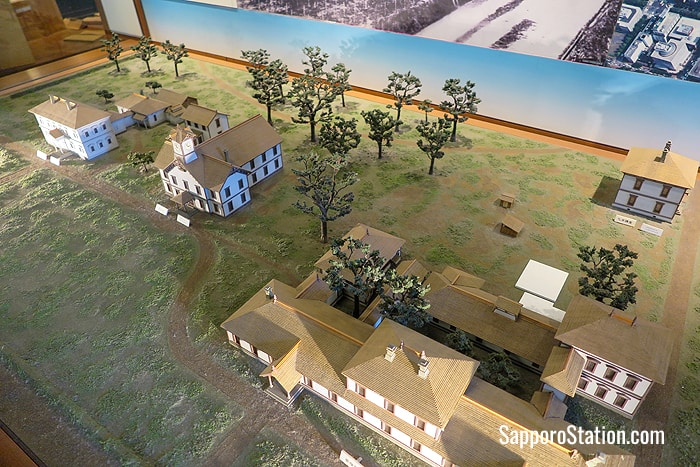 A diorama showing the original layout of Sapporo Agricultural College

The Clock Tower itself wasn’t originally a clock tower at all, but served as a military training hall (called enbujo in Japanese) and where there is now a clock, it had a bell tower. Although called a military training hall, the building actually served a variety of functions. Rooms on the first floor were used as laboratories, lecture rooms, and exhibition spaces for specimens of animals, plants, and minerals while the second floor was used as a gymnasium and as an auditorium for ceremonial purposes. The clock was not added until 1881 and was purchased from E. Howard & Co., a clock and watch company in Boston, Massachusetts, USA. This original machinery still works perfectly today, and you can listen to the clock’s chimes every hour.

Up until 1903, Sapporo Agricultural College was located between the present-day Kita-1-jo and Kita-3-jo avenues. The college was moved in 1903 because of the construction of Kita-2-jo Avenue, and the Clock Tower was then purchased from the college by Sapporo’s local government in 1906. The building was then removed and reconstructed in its current location.

From then until the war years the hall served various purposes: as library, as a lecture hall for local educational organizations and was also used for cultural activities. During World War 2 it was used as a military facility and then from 1950 to 1966 it was the home of the Sapporo City Library. In 1967 the building was renovated and restored to its original appearance, and it was opened to the public as a museum in 1978. 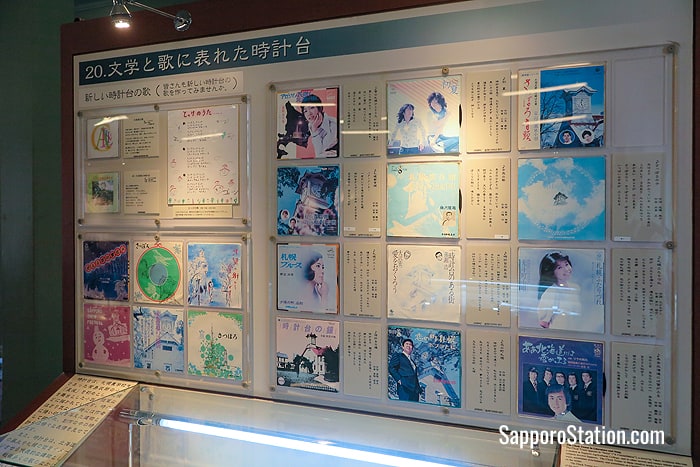 Today the first floor of Sapporo Clock Tower is an exhibition space in which a variety of models, photographs and other displays tell the story of the Clock Tower, Sapporo Agricultural College, and the early development of Sapporo. There is also a shop selling Clock Tower-themed souvenirs on the first floor. 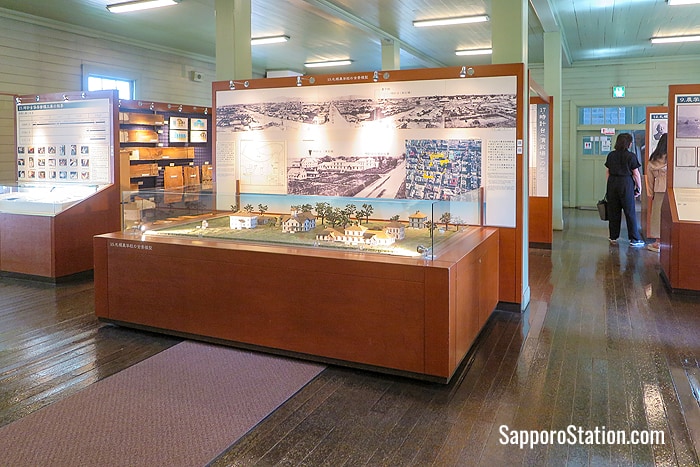 The second floor’s auditorium space is laid out just as it was in 1899 when the college held its first doctoral degree ceremony. This space also hosts events such as musical recitals and lectures in the evenings and it can be rented out for weddings. 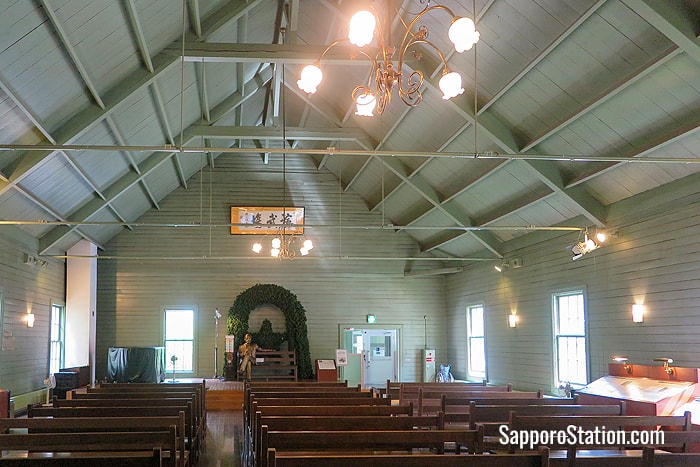 The auditorium on the second floor

At one end of the second floor you can see a statue of the American agricultural professor, William Smith Clark, who was Sapporo Agricultural College’s first vice-president and who is famous in Hokkaido for his impact on the new agricultural college and on Hokkaido’s development. It was Clark who started the military drills and exercises at the college that required the building of the Clock Tower. Clark had returned to America before the Clock Tower was built, but he is remembered for instructing his students to “be gentlemen” and for his parting words, “Boys, be ambitious”, which have become a well-known motto in Japan. The statue of Clark is seated on a bench at one end of the hall, so that visitors can sit beside the famous professor to have their photograph taken. 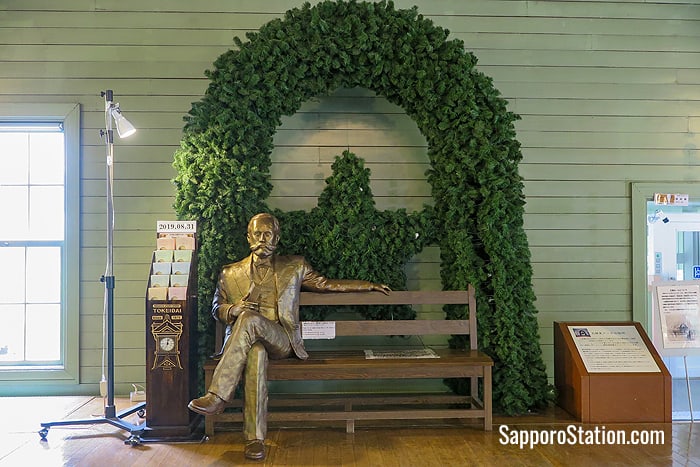 The statue of William Smith Clark

Also on the second floor you can see another E. Howard clock, just like the one in the tower, which is shown in a glass case so that you can view the clock’s complex mechanism of weights and gears. Although it looks complicated, it is basically a giant pendulum clock that is manually wound once a week and it still keeps accurate time 140 years after it was first put together. 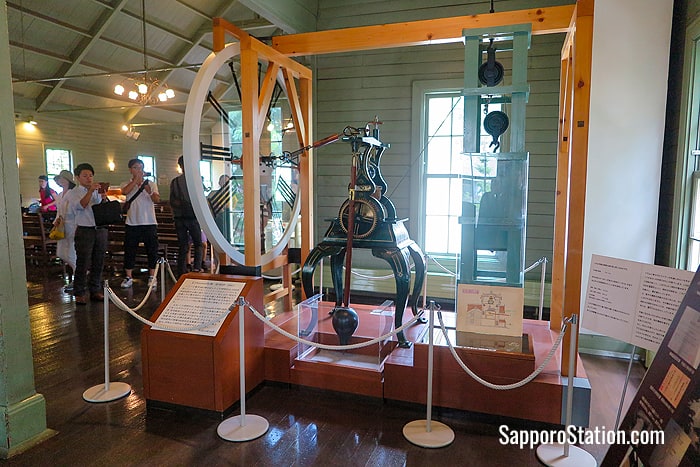 The display clock on the second floor

Sapporo Clock Tower stands on the north-east corner of Kita-1-jo Avenue and Nishi-3-Chome Dori Street. It is 4 minutes on foot from Odori Subway Station’s Exit 7 and 10 minutes from JR Sapporo Station.