Odori Park is a wide strip of greenery running east-to-west for 1.5 kilometers through the center of Sapporo city. It is a pleasant space with colorful flowerbeds and walkways lined with benches. Among the lawns and fountains local people and tourists take their ease and throughout the year many of the city’s major events and festivals are held here. 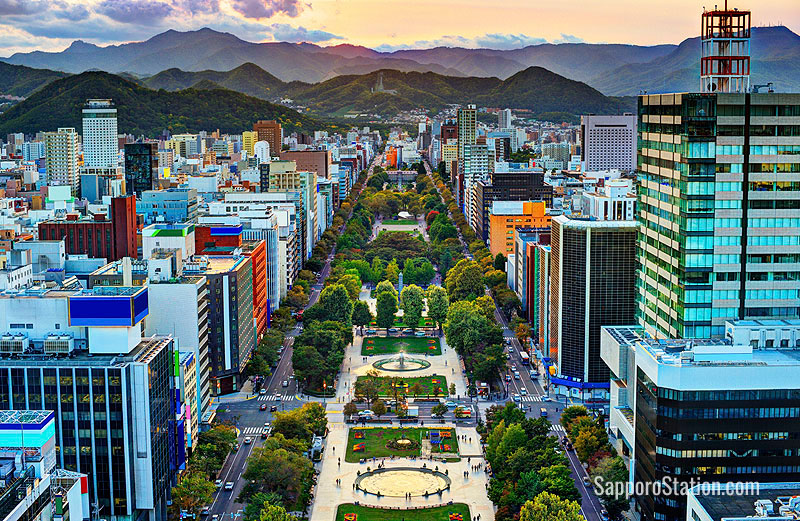 The History of Odori Park

Sapporo is a fairly modern city, as it was founded in 1869, and at that time it was laid out in a simple grid pattern with the Soseigawa Canal running north-to-south through the center of the city. Local government buildings were located in the north of the new city, while business and residential buildings were located in the south. Odori Park marks a dividing line between these two historic sections.
The name Odori, basically means “Big Street”. This is because before Odori Park was a park it was actually a street called Shiribeshi Dori. This street was originally constructed in 1871 as a wide firebreak dividing the northern and southern parts of the city. In 1881, as part of general renaming of unpopular street names, Shiribeshi Dori was officially renamed Odori.

In the beginning, it was not clear how this broad strip of land would be used. In June 1872 horse races were held here, and there was an agricultural exposition held here in 1878. However, from 1875 onwards Sapporo’s citizens began to introduce Western style flowerbeds, and finally in 1909, the landscape gardener, Nagaoka Yasubei, was invited to develop the street as a leafy promenade. Nagaoka also designed Nakajima Park which is located further to the south. 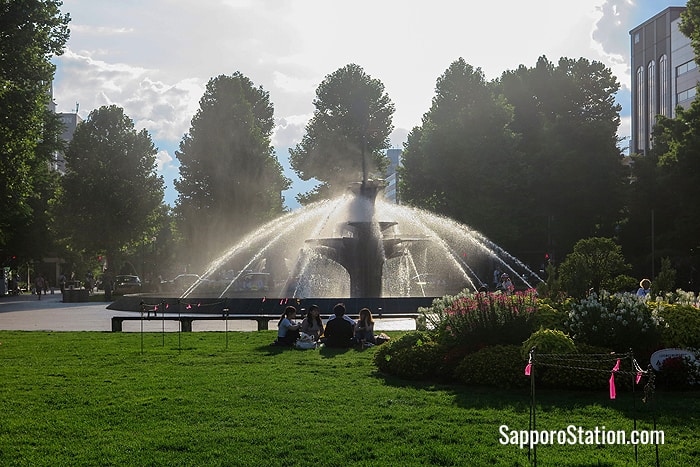 Odori Park is a green oasis of lawns, fountains, and flowerbeds

During the food shortages of World War 2, Odori Park was used for growing crops and vegetables. Immediately after the war part of the park was used as a dumping ground for garbage and snow, while another part was taken over by the occupying US army who built a church and some sports facilities such as tennis courts and a baseball ground. The army returned their portion of the park to the city in 1950, and their religious and sporting facilities disappeared as Odori was revived as a park.

A major part of the park’s revival was the planning of flower gardens. There are now 87 flowerbeds in the park which are tended by local garden design companies. A flowerbed contest, first held in 1954, is also held here every summer.

Today the park has 4,700 trees of 92 varieties which include large trees such as elm, plane, maples, and zelkova. There are also flowering trees and shrubs such as cherry trees and magnolias which bloom in the spring, hydrangeas and azaleas which bloom in early summer and roses which bloom throughout the summer and autumn. Among the trees are 400 lilacs which are the official trees of Sapporo city and these bloom from late May to mid-June. 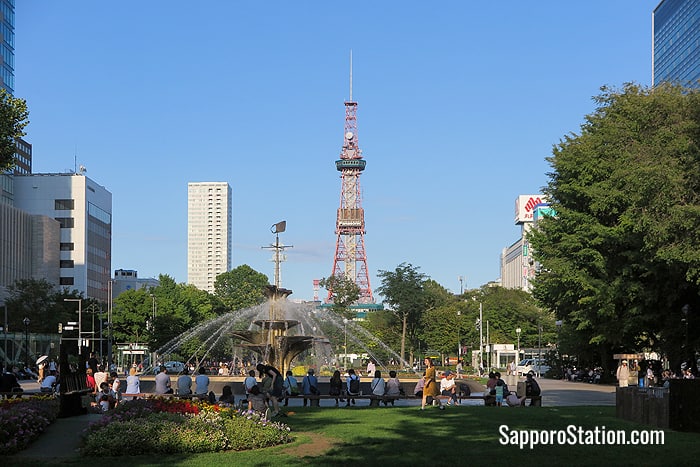 Odori Park covers 13 city blocks called chome which run from Nishi-1-chome in the east to Nishi-13-chome in the west. Each block name is preceded with “Nishi” meaning “west” because the entire park is located to the west of the central Soseigawa Canal.

The park is bordered at either end with two big tourist attractions. At the eastern end of the park, in Nishi-1-chome, you can find Sapporo TV Tower which has souvenir shops, restaurants and an observation deck. At the western end, in Nishi-13-chome, you can find the Shiryokan which is a historic court building now used as a museum, event space, and art gallery. 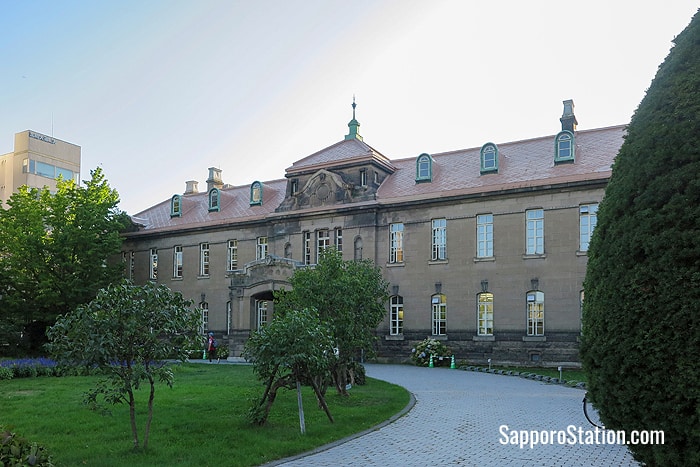 The Shiryokan at the western end of the park 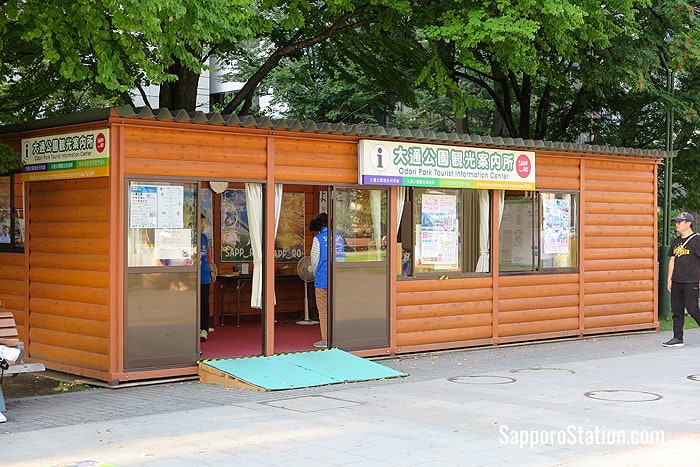 Sweetcorn stalls called toukibi wagon are set up throughout the park in the spring. These stalls sell locally grown sweetcorn grilled or boiled as a takeaway treat from late April till mid-October. 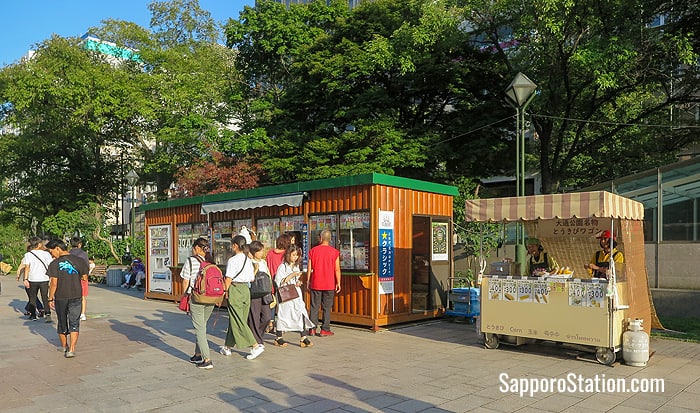 The park has many fountains, but the fountain at Nishi-3-chome runs through 16 different patterns in 15 minutes. 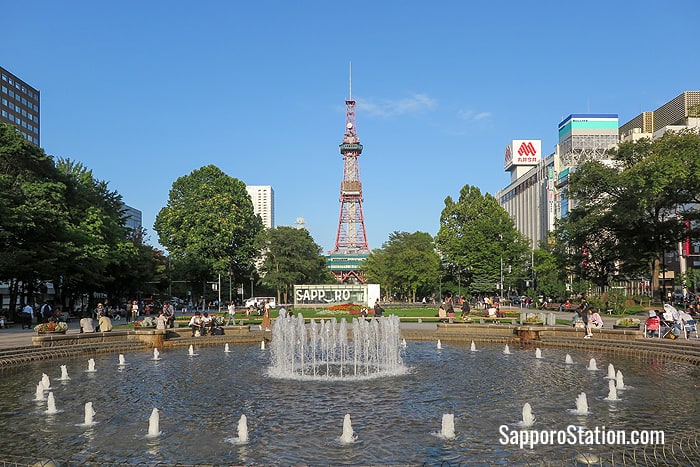 There are many statues dotted around the park. “Shepherd Boy” by Takashi Mine was the first statue to be erected after the war and it is a tribute to Hokkaido’s dairy farming industry. 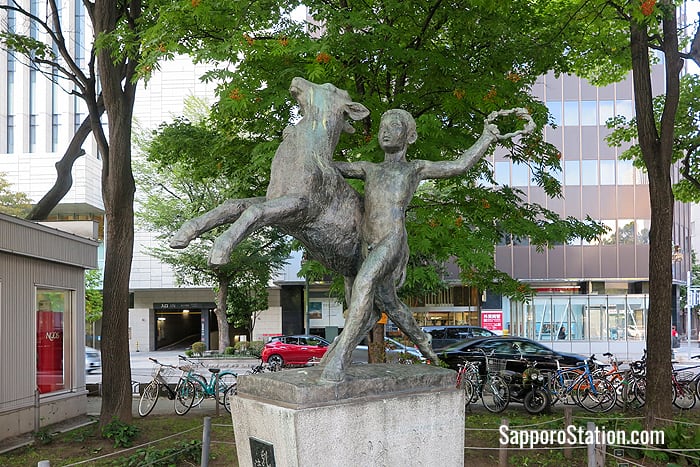 The statue “Lake Breeze” by Ryojo Yamada was erected in 1975 to mark the opening of the Tozai Subway Line. 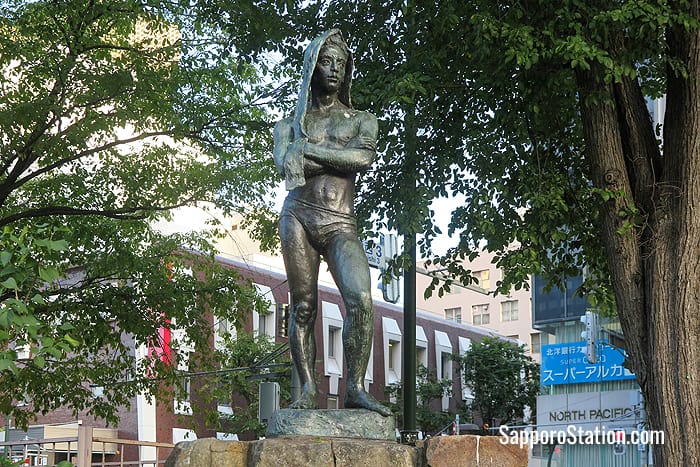 Between Nishi-8-chome and Nishi-9-chome you can find a children’s playground with a slide, and a watercourse that children can splash around in. 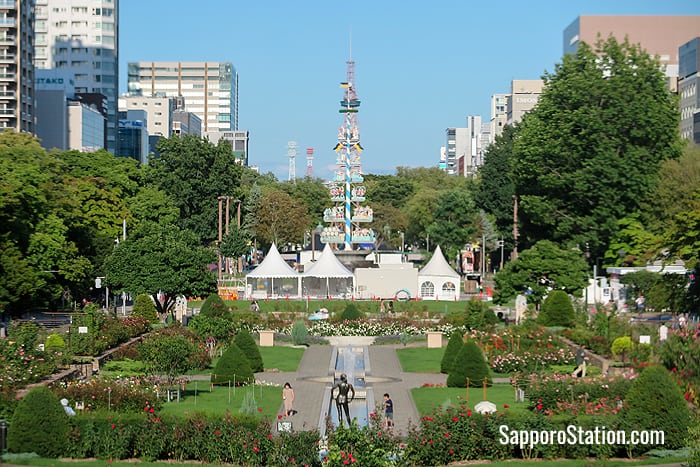 The sunken rose garden at Nishi-12-chome

At Nishi-12-chome the sunken rose garden has 1,300 roses of 32 different varieties blooming from June till October.

Many of Sapporo’s major annual events and festivals take place in Odori Park. Below are the main events that take place here throughout the year.

The Lilac Festival, which was first held in 1959, includes musical performances, an outdoor tea ceremony, a wine garden, food stalls, and lilac seedlings which are given away freely on the first day of the festival.

This colorful dance festival is based on a similar event held in Kochi Prefecture, but with the addition of Hokkaido sea shanty style soran bushi melodies. Visitors can view the performances for free, take dancing lessons, and enjoy festival food from stalls set up in the park.

The summer festival was first held in Nakajima Park in 1954, but since 1957 its main venue is Odori Park. For about a month a giant beer garden with seating for 13,000 people is set up in the park. Sapporo beer naturally takes pride of place, but a range of domestic and international craft brews are also available, as well as seasonal foods from festival stalls. In mid-August the festival ends with Hokkaido Bon Odori, a traditional circular dance in honour of departed ancestors.

A range of musical events are held throughout the city during the summer months, but the Sapporo Music Tent in Odori Park has almost daily performances.

This food festival is held through most of September and features a beer garden, sake, wine and cocktail stalls, and local specialty cuisine such as a wild game barbecue, seafood and ramen stalls, and international dishes too.

The Christmas Market is an annual celebration of Sapporo’s sister-city ties with Munich in Germany. Stalls sell German treats and hot spiced wine, and there are outdoor performances and craft workshops.

During this event glittering art objects covered in lights are set up throughout Odori Park and even Sapporo TV Tower is decorated.