The Tozai Subway Line is a subway line in Sapporo which runs from Miyanosawa Station in the west of the city to Shin-Sapporo Stationin the east. It provides a quick and convenient means for traveling from central Sapporo to outlying locations such as Maruyama Park or Sapporo Science Center. The name “Tozai” means “east-west”. 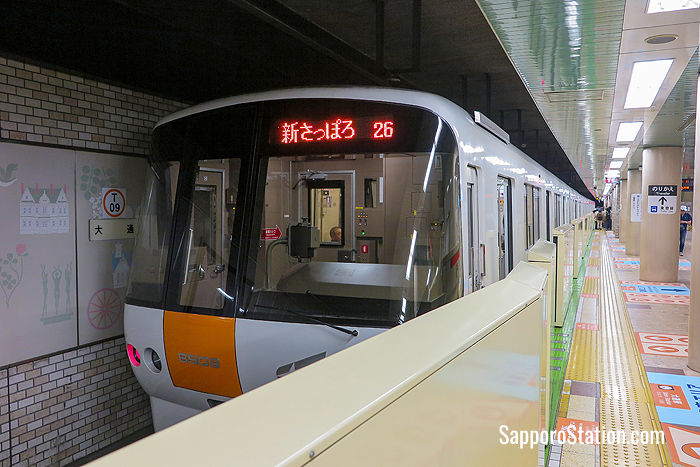 A Sapporo subway train on the Tozai Line at Odori Station

This is one of three subway lines in Sapporo that are operated by Sapporo Municipal Subway. The others are the Namboku Line, and the Toho Line. All three lines meet at Odori Station. On station maps and signage the Tozai Subway Line is color-coded orange. 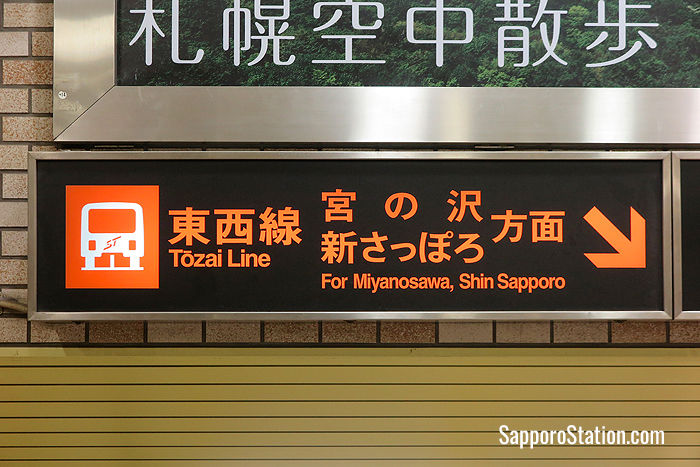 A sign for the Tozai Line at Odori Station

The Tozai Line runs through Sapporo’s Nishi, Chuo, Shiroishi, and Atsubetsu wards and has 19 stations.

The key destinations are listed below with example fares and journey times given from Miyanosawa Station.

Miyanosawa Station is an 8 minute walk from Shiroi Koibito Park. This theme park is named after one of Hokkaido’s most popular souvenirs: Shiroi Koibito chocolate cookies. Here visitors can take a tour of the cookie factory, take part in cookie-making workshops, visit a confectionery museum, view a rose garden, enjoy a projection mapping show, and shop and dine at a variety of venues. For children there is also a miniature town and railway line, and a mechanical clock tower with automated marionettes.

Just 7 minutes’ walk from Miyanosawa Station is the Teine Memorial Museum which was built to preserve the history of the old town of Teine after it was merged with Sapporo in 1967. The museum is free and has a variety of exhibits related to the lives of the pioneers who settled this area in the 19th century.

The Kotoni area was first settled by military settlers called tondenhei or “farmer soldiers” in 1874. Just 3 minutes from Kotoni Station is a preserved 19th century residence of these early colonists which is called Kotoni Tondenheison-heioku (Kotoni Tonden Village Barracks). The building is free to enter and gives an insight into pioneer life. Nearby Kotoni Shrine was also established by the tondenhei in 1875.

Penny Lane 24 is a well-known live music club which has been a popular venue for major Japanese musicians and comedians since the 1980s. It is a 3 minute walk from Kotoni Station.

This station is a 15 minute walk from Sapporo Racecourse and 14 minutes from the fresh seafood stalls and restaurants of Sapporo Central Wholesale Market.

This station is named after Maruyama Park which is located 4 minutes on foot to the west. This is a massive park which includes a wild forest and athletic facilities such as a baseball stadium and tennis courts. Inside the park is Sapporo Maruyama Zoo which has numerous animals on display including bears, chimpanzees, elephants, orangutans, and red pandas. The park is also the location of a major shrine called Hokkaido Jingu which was established here in 1869. The shrine is a popular cherry blossom viewing location in the spring and the shrine festival, called Sapporo Matsuri, is held here every year from June 14th – 16th.

The Migishi Kotaro Museum is a 10 minute walk from Nishi-Juhatchome Station. This museum displays the art of Migishi Kotaro (1903 – 1934), a local artist who painted in a modern Western style. Also nearby is the Hokkaido Museum of Modern Art which has an extensive collection including early 20th century works by Jules Pascin and other artists of the School of Paris, a glass-work collection ranging from Art Nouveau to contemporary works, 19th century Ukiyo-e prints, and modern and contemporary works by artists from Hokkaido and overseas. This museum is just 6 minutes’ walk from the station.

The Nishi-Jugo-Chome Stop of Sapporo Streetcar is a 7 minute walk from this station.

This station on the edge of Odori Park is a 4 minute walk from Sapporo Shiryokan. This building was built in 1926 and was formerly Sapporo’s Court of Appeals. It is now open as a free museum, art gallery and event space.

The Chuo-Kuyakusho-Mae Stop of Sapporo Streetcar is a 3 minute walk from this station.

Odori Station is located in the central business district of Sapporo. Here you will find many hotels, and a great range of shopping and dining facilities. The station is convenient for Odori Park; a pleasant green space which is often used for local events. In February each year this park is filled with huge snow statues as part of the Sapporo Snow Festival. There is also a Lilac Festival which is held here each May and beer gardens during the summer. Inside the park and right outside Exit 25 of Odori Station is the 150 meter tall Sapporo TV Tower. The tower has an observation deck from which one can enjoy a splendid view over the park. 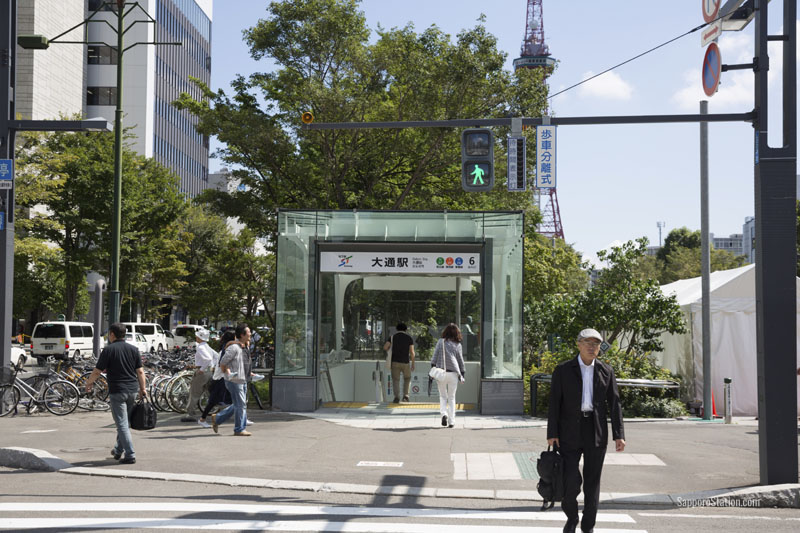 Sapporo Clock Tower, a 19th century wooden building which has become a symbol of Sapporo, is a 3 minute walk north of Odori Station. Tanukikoji Shopping Arcade and Nijo Fish Market are each a 4 minute walk to the south.

Transfers can be made at Odori Station to the Tozai and Toho subway lines. Exit 10 of this station is a 1 minute walk from the Nishi-Yon-Chome Stop of the Sapporo Streetcar.

This station serves Odori Bus Center which is a departure point for both local bus services and highway bus services for locations such as Nemuro, Esashi, Wakkanai, Hakodate, Kushiro, and Obihiro.

Chitosetsuru Sake Museum is a 7 minute walk from this station. Here you can learn about the history of the local Nippon Seishu sake brewery, sample some fine sake, and buy yourself some tasty souvenirs. Entrance to the museum is free.

This station is also a 5 minute walk from the Sapporo Factory shopping complex.

This station is convenient for Asahi Beer’s Hokkaido Brewery. Tours and tastings at the brewery, are free but must be booked in advance. Also nearby is Asahi Beer Garden Hamanasukan, which is a massive beer hall serving barbecued lamb, yakiniku-style grilled beef, and shabu-shabu along with plenty of Asahi beer.

This station is a convenient exit point for three museums and an aquarium.

Sapporo Science Center is a museum and planetarium with exhibits related to robotics, astronomy, and Hokkaido’s winter climate. It is a 6 minute walk from the station.

The Sunpiazza Aquarium is home to various creatures including rockhopper penguins, spotted seals, Asian otters, and 1,500 fish. The aquarium is inside Sunpiazza Shopping Center and a 5 minute walk from the station.

The Historical Village of Hokkaido is an open-air architectural museum with buildings dating from Hokkaido’s pioneer period in late 19th and early 20th centuries. It is an 18 minute bus ride from the station.

Exhibits at the Hokkaido Museum explore Hokkaido’s history by connecting human culture with the natural world. The museum is a 15 minute bus ride from the station.

All tickets can be bought from ticket machines outside the ticket gates at each subway station. IC cards such as the local SAPICA card or other regional cards such as Kitaca, Suica, PASMO, and TOICA, can be used on the subway as well as on Sapporo’s bus and streetcar networks.