The Hoheikan is a historic 19th century hotel building in Sapporo’s Nakajima Park which is now maintained as a museum and event space. It is the oldest wooden hotel building in Japan, and in its glory days as a guest lodging for high-ranking officials it hosted three emperors and was famous for its Western-style banquets. The exterior of the building is distinctive for its white and “ultramarine blue” paintwork. In the 19th century the ultramarine pigment had to be specially imported from Europe. 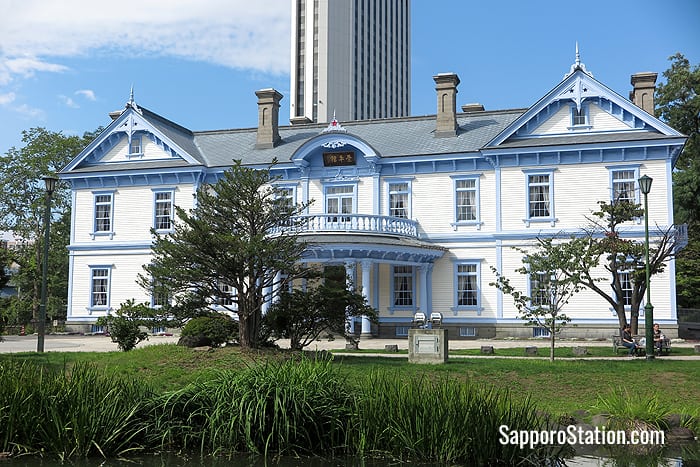 The Hoheikan building in Nakajima Park

Designed by Kiko Adachi, who also designed the Sapporo Clock Tower the Hoheikan was built in an American style, but with Japanese building techniques. Because it is a rare example of early Meiji era architecture it is now nationally designated as an Important Cultural Property. Today visitors to the Hoheikan can view the interior rooms which have been restored to their original Meiji era appearance.

The History of the Hoheikan

The Hoheikan was built in 1880 by the local government of Sapporo as a public hotel for the use of Western engineers and experts who visited Hokkaido as advisors during its pioneering period. However, the Hoheikan’s first guest was actually the Emperor Meiji who stayed there for four days in the summer of 1881. With its status raised as a “temporary palace”, the hotel became popular with visiting officials and nobility, and in fact two more emperors would stay at the Hoheikan: the Emperor Taisho in 1911, and the Emperor Showa in 1922. 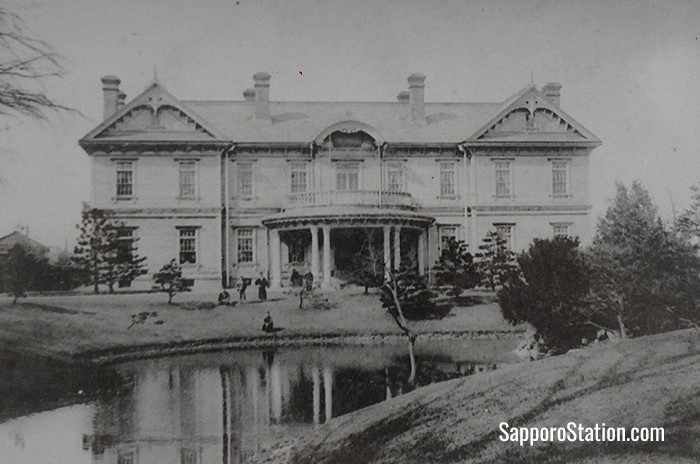 The Hoheikan in 1881. Picture courtesy of Sapporo City Public Archives

Over the years the Hoheikan served many different functions. In 1927 an extension was added to the rear of the building and it was converted into a public hall for musical performances and other cultural activities. During World War 2 the Hoheikan was used by the military and after the war the occupying army used it as accommodation. It was also, for a brief time in 1946, the temporary home of Mitsukoshi Department Store when the US army took over the Mitsukoshi building. However, from the late 1940s onward it was used as a community center and civic hall.

The Hoheikan originally stood in a much more central location, close to the eastern end of Odori Park and just to the north of Sapporo TV Tower. In 1956 it was decided that a new civic hall would be built at this location and there was a debate about whether to demolish or preserve the Hoheikan. Fortunately, it was decided that the original wooden building would be dismantled and reassembled at another site. The Hoheikan was reconstructed in Nakajima Park in May 1958.

In its new location the Hoheikan was used as a popular wedding venue until 2011 and many thousands of couples were married here. In 2012 the building underwent a 5-year period of renovation during which time the interior rooms were restored to their original Meiji era appearance. The Hoheikan was reopened to visitors in 2016. Today the public can view the interior during its daytime opening hours while certain rooms can be rented in the evening for events, parties, lectures, and performances.

The Hoheikan’s original location was on the north side of Odori Park, where there is now a civic center called Kanamoto Hall. On its original site the Hoheikan stood in a large garden designed by the German agricultural expert, Louis Boehmer. Boehmer’s Western-style landscape garden apparently extended as far as the current location of Sapporo TV Tower and, together with the Western-style hotel, caused a big sensation at the time of its creation. Sadly Boehmer’s garden was not recreated when the Hoheikan was moved to Nakajima Park. However, visitors to the Hoheikan today can now view the extensive park grounds from its windows. 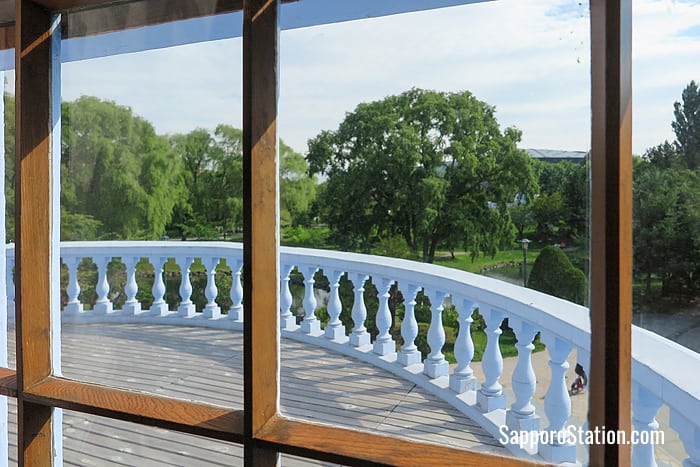 A view over the park from the 2nd floor hallway

Visitors to the Hoheikan can wander through the lovingly restored rooms and admire the grand fireplaces, elegant curtains, fine plasterwork, and gorgeous chandeliers. An English language brochure is available which has lots of information on the building’s architecture, the interior features, and full details about each of the rooms. 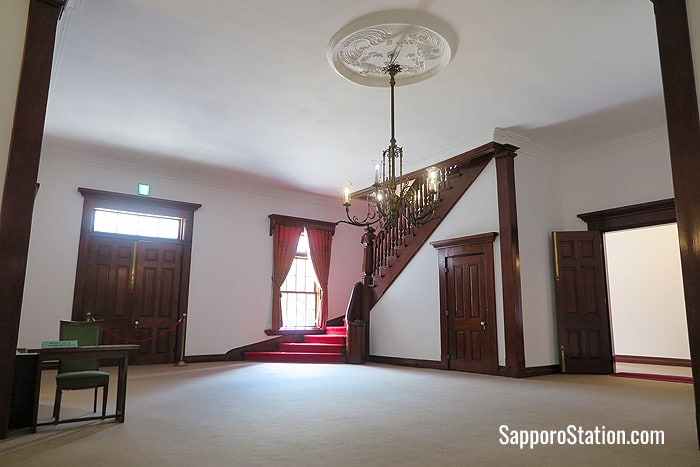 Several rooms have video presentations about the Hoheikan’s construction and history which are projected onto the walls. 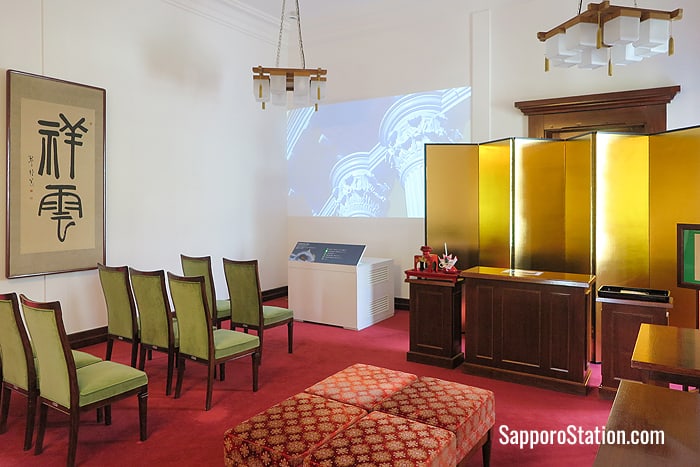 Videos are projected on the walls of the Tsubaki ceremonial room

Various items are displayed throughout the building and the rooms are furnished with reproductions of the original furniture based on historical sources. 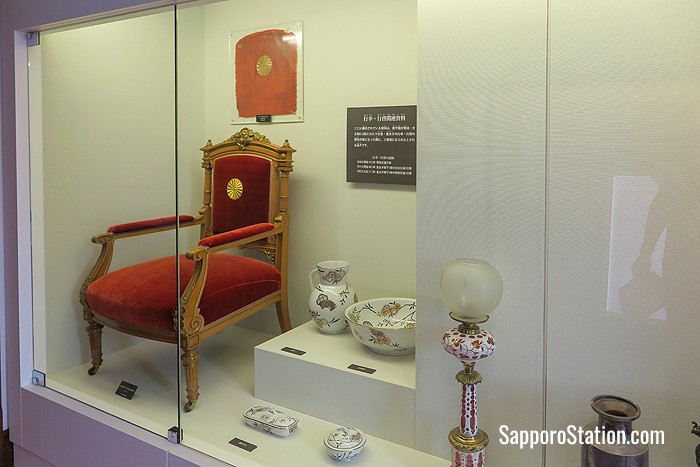 Visitors can also view the rooms used by Emperor Meiji during his 1881 visit to Sapporo. 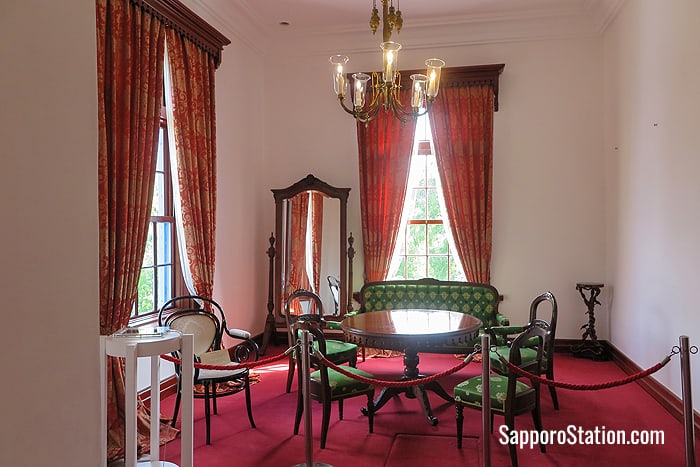 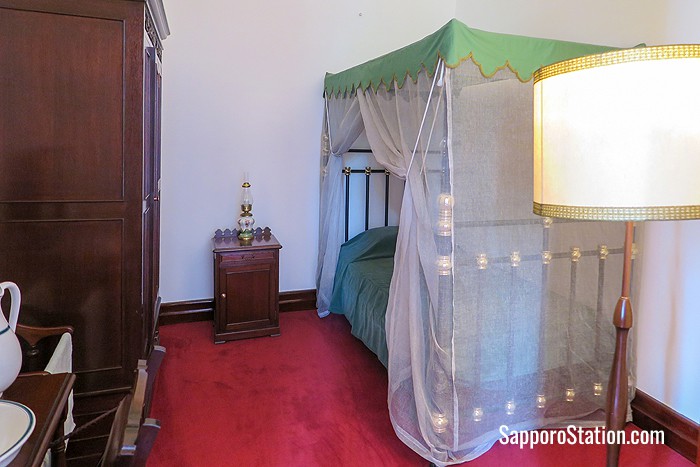 The Ume-Nema Room was the Emperor Meiji’s bedroom

The Hiroma or “Hall” on the 2nd floor is the largest room in the Hoheikan. 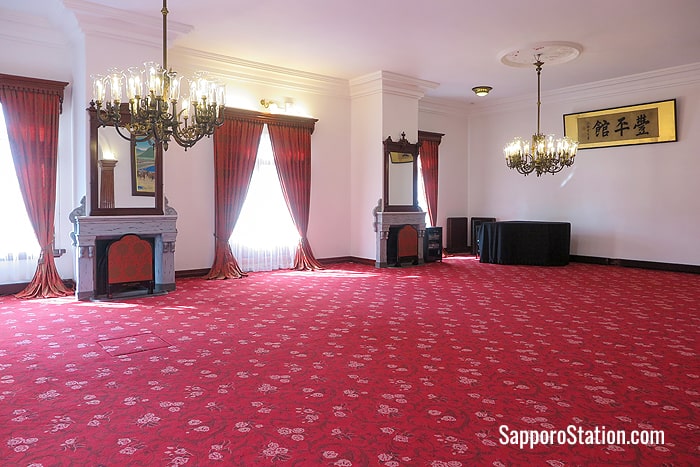 Inside the 2nd floor Hiroma

There is a tablet device in the Hiroma which shows you how the room would have been used in the 19th century, which includes animated dancers at a ball, and a full explanation of the furnishings and decor. 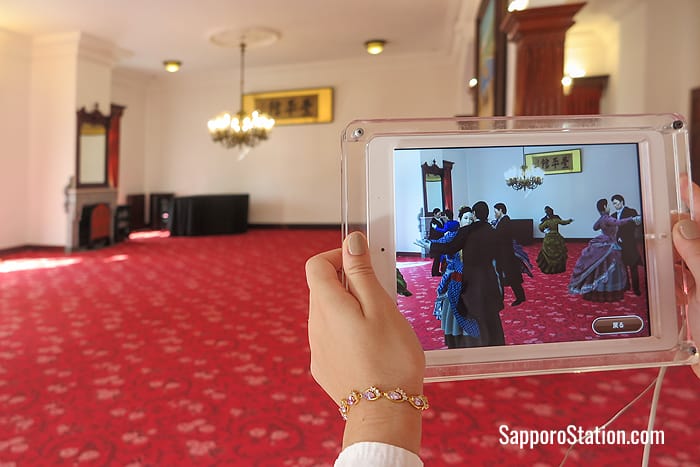 Remarkably, the hotel has six marble fireplaces and all of its original chandeliers. 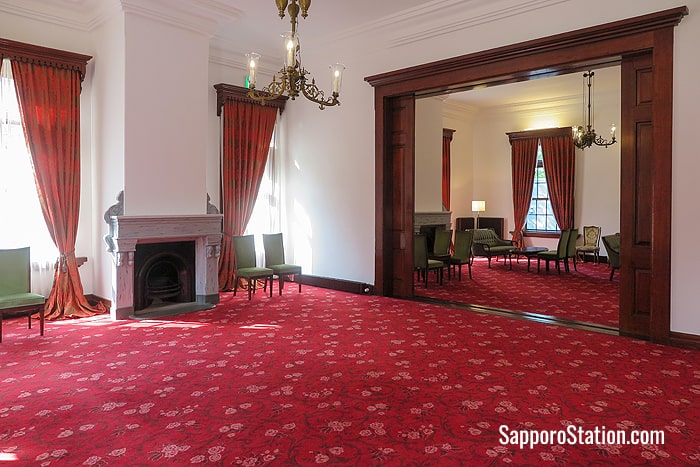 Another view of the Hiroma

After viewing the restored rooms visitors can take a break in the Hoheikan’s café. Café Harunire serves coffee and tea and is open from 10.00 till 16.00. 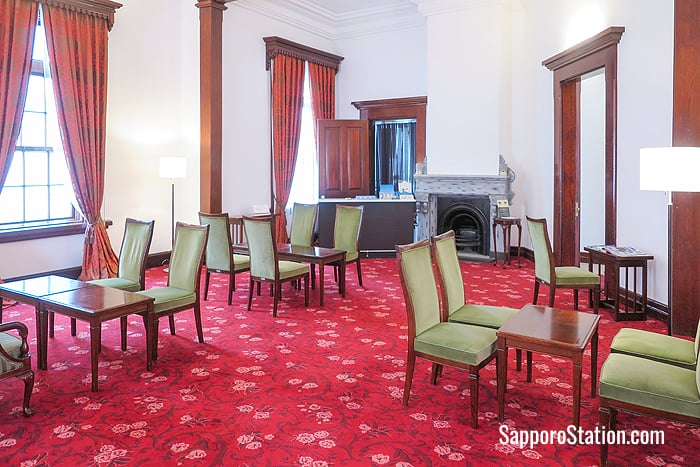 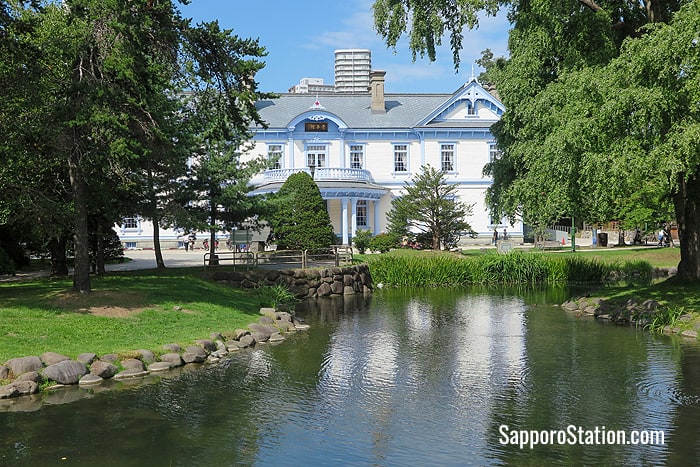 The Hoheikan glimpsed through the trees at Nakajima Park