The Ozora is a limited express service that links the cities of Sapporo, Obihiro, and Kushiro. 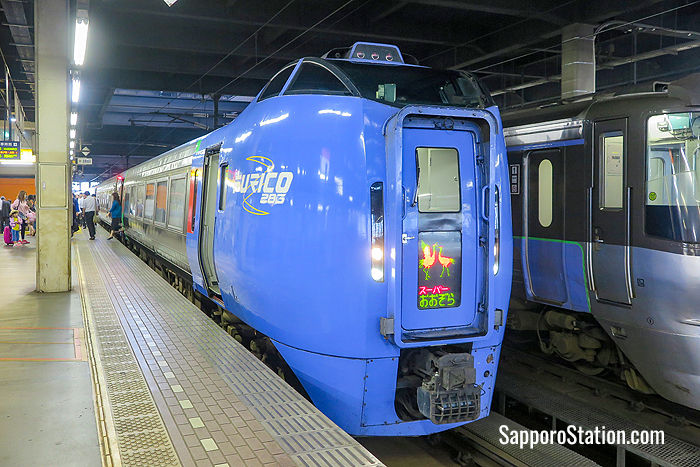 Previously this service was called the “Super Ozora”, but its name was shortened to Ozora in March 2020. The name Ozora means “Big Sky”. The Ozora is operated by JR Hokkaido and so is fully covered by the Japan Rail Pass. 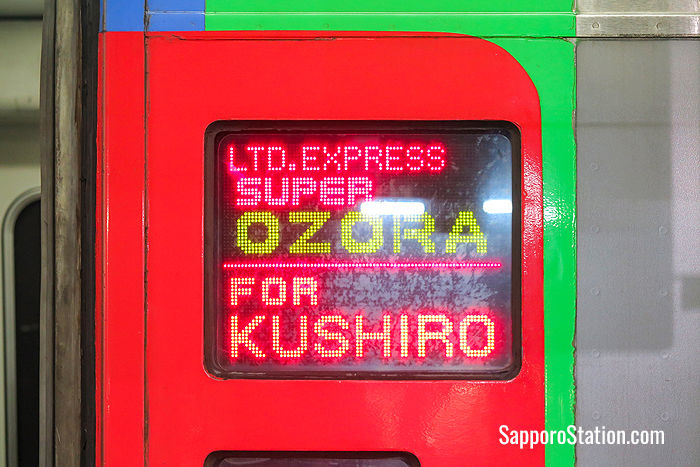 A carriage banner on the Ozora service

Stations served by the Ozora are listed below. Stops differ depending on the service number, so the stations in brackets () are not served by all trains.

The Ozora makes 6 return services between Sapporo and Kushiro every day, but this is supplemented by the Limited Express Tokachi which runs 5 return services between Sapporo and Obihiro each day. The key destinations for the Ozora are listed below with non-reserved train fares and example journey times given from Sapporo Station. For more detailed information on Sapporo, Obihiro, and on destinations in between please see our article on the Tokachi which follows the same route as far as Obihiro. 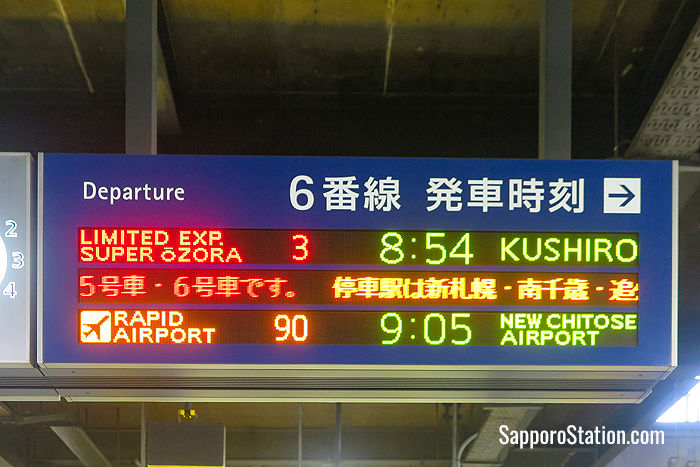 Sapporo is a pleasant city with wide tree-lined roads, and plenty of parks, museums, and other cultural facilities. The city’s top attractions include several historical buildings such as the 19th century Sapporo Tokeidai (Sapporo Clocktower) and the Hoheikan guest house in Nakajima Park. Other popular sites include the Sapporo Brewery Museum and Beer Garden, Hokkaido University Botanical Gardens, and the ropeway ride to the summit of Mount Moiwa. The Sapporo Snow Festival is major event held each February during which beautiful ice sculptures and giant snow statues decorate the city’s streets and parks.

Obihiro is a friendly city which has easy access to hot spring resorts located in nearby natural parks as well as its own unique local attractions. Top attractions include Obihiro Zoo, the modern and contemporary art collection in Obihiro Museum of Art, the local history and natural history exhibits in Obihiro Centennial Hall, and the Obihiro Racecourse which is dedicated to a unique horse race called “Banei” in which large draft horses pull heavily weighted sleds. Hot spring spa resorts can be found at Tokachigawa Onsen which is located on a peat moor a 20 minute taxi ride from Obihiro Station, and at Shikaribetsu Kohan Onsen on the western shore of Lake Shirabetsu. The lake can be accessed by bus from Obihiro Station in around 1 hour and 40 minutes or by car in 1 hour and 10 minutes.

The top attraction in the town of Ikeda is a working winery called Ikeda Wine Castle where you can take a tour, view the wine-production process, sample the wines, wander the vineyards, have a meal, and buy some fine tasting souvenirs. Admission to the winery is free but there is a fee for the all-you-can-eat-and-drink Autumn Wine Festival which is held every year in October. The winery is open from 9.00 to 17.00 and only closes for maintenance or the New Year holidays. Ikeda Wine Castle is a 15 minute walk from Ikeda Station.

Not far from Ikeda Wine Castle is a dairy farm called Happiness Dairy which is well-known for its gelato ice-cream, cheese and other dairy products. As well as a shop, there is also a café where you can enjoy some unusual pizzas such as raclette cheese and potato, or rhubarb and green soybeans.

Kushiro is a major fishing port which is famous for its seafood and its many cultural attractions. It is also an excellent base for visits to the natural scenery around Lake Akan and Kushiro Shitsugen National Park. Some of the top sightseeing attractions are listed below.

Washo Market is a famous fish market, just a 3 minute walk from the station, where you can view an incredible variety of marine produce and buy some to eat on the spot. A popular dish here is the “katte-don”: a bowl of rice on which you can place a variety of seafood toppings according to your personal taste. For more excellent seafood check out the waterfront commercial complex Fisherman’s Wharf Moo. Just 13 minutes from Kushiro Station, this is a well-known gourmet location with restaurants, a terrace grill, and a food court filled with seafood stalls.

Kushiro Children’s Museum is science museum which emphasizes learning through play. The museum features hands-on exhibits, live demonstrations and experiments, and a planetarium. The museum is open from 9.30 to 17.00 (with last entry at 16.30) and closed on Mondays (unless it is a national holiday when it will close the following Tuesday). It is also closed from December 31st to January 5th. Admission to the exhibition area is 590 yen for adults, 240 yen for senior high students, and 120 yen for children of junior high age or younger. There are extra fees for the planetarium. This museum is an 8 minute walk south of Kushiro Station.

Kushiro Art Museum is an attractive contemporary facility exhibiting a large collection of art works by local artists which includes oil paintings, watercolors, sketches, prints, photography, sculptures, crafts, and traditional Nihonga style paintings. This museum also plays hosts to a range of events including concerts, film shows, and lectures. Admission is 460yen for adults and 200 yen for high school and university students. Special exhibitions will have a separate fee. The museum is open from 9.30 to 17.00 and closed on Mondays and during the New Year holidays (December 29th to January 3rd). The museum is a 15 minute walk from Kushiro Station.

Kushiro City Museum is a large museum in a striking modern building with displays on local history, archaeology, geology, natural history and indigenous Ainu culture. Admission is 480 yen for adults, 250 yen for senior high students, and 110 yen for children of junior high age or younger. The museum is open from 9.30 to 17.00 between April and early November, and closed on Mondays and during the winter season. This museum is a 15 minute bus ride from Kushiro Station.

Kushiro City Zoo is a large facility that houses and exhibits not only exotic beasts such as lions, tigers, orangutans, giraffes and zebras, but also has a large area devoted to native Hokkaido wildlife such as the Ezo brown bear, the Japanese sable, and Hokkaido sika deer. The zoo is also home to a breeding program for another native species, the rare red-crowned crane. In addition to the animal attractions there are a number of amusement park style rides on the zoo grounds which include a large Ferris wheel and a merry-go-round. Between April 10th and October 14th the zoo is open from 9.30 to 16.30, and from October 15th to April 9th it is open between 10.00 and 15.30. Last entry is 30 minutes before closing. The zoo is closed on Wednesdays in December, January, and February and during the New Year’s holidays (December 29th – January 2nd). The zoo is just 580 yen to enter for adults and free for children of junior high age or younger. The zoo is 27 minutes from Kushiro Station by taxi or 55 minutes by bus.

Kushiro Fureai Horse Park is close to the zoo and has a range of activities for visitors including wagon rides, bridal-led horseback rides for beginners, and horseback trekking for more experienced riders. From late April to early November the park is open between 9.30 and 16.30 (until 17.00 in July and August), and in the winter season it closes at 15.30. The park is closed on Wednesdays.

Kushiro Shitsugen National Park is a large area of marshland which is popular for bird watching, hiking, and canoe tours. It is also notable as the last refuge of the rare red-crowned crane which can be viewed here at several locations, especially during the winter when they gather at feeding sites. Wild cranes can be viewed at Tsurui-Ito Tancho Sanctuary between October and March, and captive cranes at Akan International Crane Center all the year round. Akan Bus also run a bus tour to view the cranes during the winter months. Another way to see the marshes is by taking the Kushiro Shitsugen Norokko Train. This is a special sightseeing train that runs along the Senmo Main Line from Kushiro Station to Toro Station between the months of April and October.

Lake Akan is a large crater lake with breathtaking scenery located to the north of Kushiro. On the shore of the lake is a popular hot spring resort called Akanko Onsen. Hinanoza is a luxurious hot spring inn here, that has spacious guest rooms, private open-air baths with lake views, and traditional dining facilities. A shuttle bus from Kushiro Station takes around 2 hours to reach the resort while a taxi takes around 90 minutes.

Other attractions around the Akanko Onsen resort area include the Eco Museum Center which has information and exhibits related to local wildlife, plant life, and volcanoes. The center is free to enter and open from 9.00 to 17.00 and closed on Tuesdays. Also nearby is Akanko Ainu Kotan, a village dedicated to Ainu indigenous culture which features craft shops, restaurants with traditional Ainu cuisine, and a theater where you can watch traditional dances and puppet shows.

Lake Akan is also famous for the formation of large round balls of green algae called “marimo”. This rare natural phenomenon can be seen at the Marimo Exhibition and Observation Center which is located on Churui Island and can be reached via a sightseeing cruise boat.

Kushiro has its own airport, called Tancho Kushiro Airport, which has regular flights to and from Haneda Airport in Tokyo, Kansai Airport in Osaka, as well as Sapporo Okadama Airport and New Chitose Aiport in Hokkaido. Akan Bus run a shuttle bus service between Kushiro Station and the airport which takes 45 minutes.

Transfer at Kushiro Station to services on the Nemuro Main Line or Senmo Main Line. 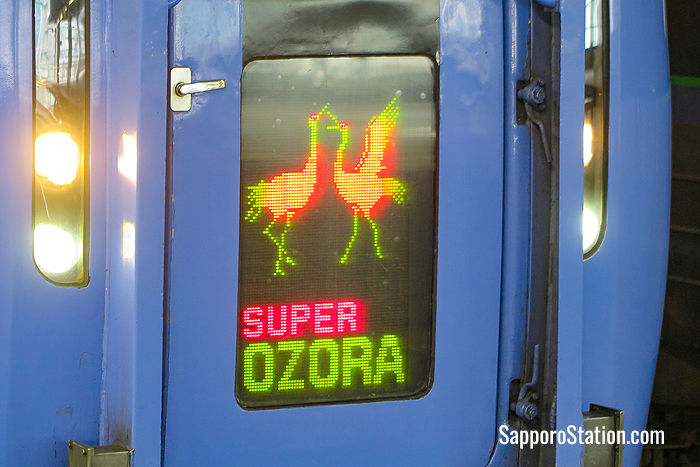 The Ozora employs either a Kiha 261 series or a Kiha 283 series tilting train in a 6-car formation. This train has one Green Car for 1st class passengers, three cars of reserved seating and two cars of non-reserved seats. The Ozora is non-smoking throughout.

To plan your journey on this route use the timetable and route finder and the downloadable route map on the official JR Hokkaido English language website.