The Tokachi is a limited express service that links the cities of Sapporo and Obihiro in Hokkaido passing through the popular Tomamu and Sahoro ski resorts on the way. 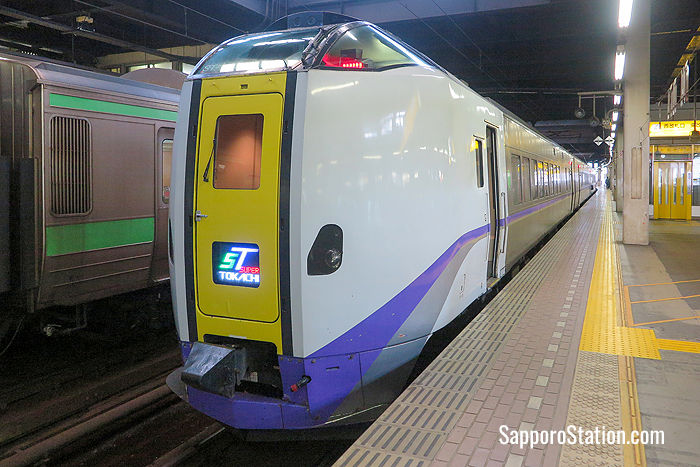 Previously this service was called the “Super Tokachi”, but its name was shortened to Tokachi in March 2020. This service is operated by JR Hokkaido and so is fully covered by the Japan Rail Pass. 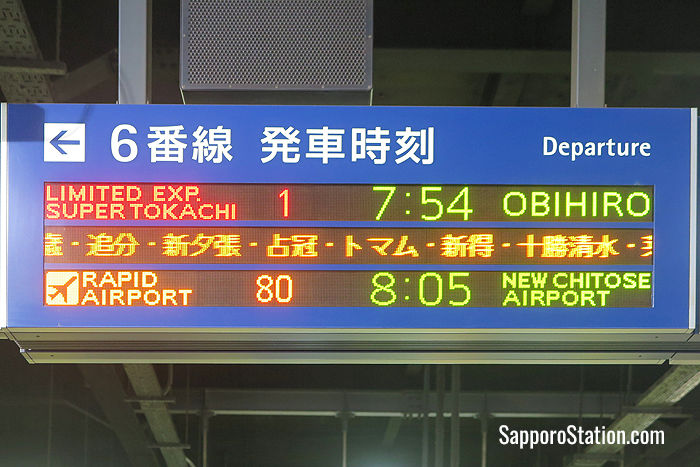 The Tokachi stops at the following stations.

The key destinations are listed below with non-reserved fares and example journey times given from Sapporo Station.

The biggest city on the island of Hokkaido, Sapporo is well-known for its organized, grid-like street plan, which makes it very easy to find your way around. The main shopping district lies between Sapporo Station and Odori Park, while the entertainment district of Susukino is located further south. Dotted around the city are several historic 19th century buildings such as the famous Sapporo Clock Tower, the Old Hokkaido Government Office, and the Hoheikan guest house in Nakajima Park. Other popular attractions include the Sapporo Brewery Museum and Beer Garden, the Hokkaido University Botanical Gardens, and the ropeway ride to the top of Mount Moiwa. Sapporo also plays host each year to a Snow Festival during which beautiful ice sculptures and giant snow statues decorate the city’s streets and parks.

Transfers can be made here to local services on the Hakodate Main Line, Chitose Line and Gakuen-Toshi Line. This station also has limited express services for Hakodate, Abashiri, Wakkanai, Kushiro, Asahikawa and Muroran, and rapid services for Niseko, Otaru and New Chitose Airport.

This station is a convenient exit point for several museums on the eastern edge of Sapporo such as the Sapporo Science Center, which is a 5 minute walk from the station, and the Hokkaido Museum and the Historical Village of Hokkaido which can both be accessed in 15-20 minutes by taking bus 22 from bus stop 10 outside the station.

This station serves the city of Chitose which is a good base for visiting the beautiful natural scenery around Lake Shikotsu. Hiking, camping, canoeing, kayaking, fishing, and sightseeing cruises are all popular activities in this area. On the eastern side of the lake is the hot spring resort of Shikotsu Onsen. Among the hotels there Kyukamura Shikotsuko is a traditional inn with hot spring bathing facilities and saunas, which organizes various activities for guests including nature treks, canoeing, and bird watching. Another popular hotel is the Resort Spa Mizu-no-Uta. This is a high-grade luxury hotel with a hot spring spa, two restaurants, a café, bar, and patisserie. This hotel has a free shuttle service to and from Minami-Chitose Station and day trippers are welcome to use the bathing facilities.

Transfer here to the Sekisho Line and the Airport Branch Line of the Chitose Line.

About 12 minutes’ walk from this station is a small railway museum called the Abira D51 Station which has a JNR Class D51 steam locomotive on display as well as a Kiha #183 series electric train which dates from the 1970s. The museum is attached to a roadside rest stop where you can buy refreshments, souvenirs, and local agricultural products.

Exit here for Tomamu Ski Resort which is well-known for its excellent powder snow, a variety of trails suitable for all levels of skiing ability, and family-friendly facilities. In addition to skiing and snowboarding, visitors can enjoy activities such as ice fishing, winter horseback riding, snowshoe trekking, snow buggy tours, snow mobile rides, and snow rafting. Among this resort’s attractions are a hot spring spa, a giant indoor heated wave pool, an illuminated ice village, whisky and sake tasting experiences, and 27 different restaurants and eateries. During the summer months this area is popular for outdoor activities such as golf, fishing, rock climbing, river-rafting, and canoeing. A gondola ride takes visitors to an observation point on Mount Tomamu called Unkai Terrace where you can enjoy a celebrated view of a “sea of clouds”. The resort area can be accessed by taking a free shuttle bus from Tomamu Station.

This station is the exit point for Tokachi Sahoro Resort. In the winter this is a family-friendly ski resort with beginners’ ski and snowboarding lessons available for both children and adults. Other activities include air boarding, snowshoeing, ice fishing, snow car night tours, back country skiing tours, and a tree climbing challenge for kids. Summertime activities include river rafting, canoeing, canyoning, fishing, and golf. This resort’s other major attraction is Bear Mountain which is a kind of safari park for bears. Here visitors can enjoy close-up views of the Hokkaido brown bear in a semi-natural environment. A shuttle bus transfers visitors between the resort area and Shintoku Station for free.

This station is the closest rail link to Tokachi Millenium Forest, which is a unique conservation space where natural landscapes of meadows and forests are mixed with more managed areas of ornamental gardens and farmland. Activities here include guided Segway tours, horseback trekking, and a goat cheese making workshop. There is also a café and souvenir shop (selling goat cheese) on site. Tokachi Millenium Forest can be reached by taxi from Tokachi-Shimizu Station in 20 minutes.

Obihiro is a friendly city in Hokkaido’s Tokachi Subprefecture, which has easy access to nearby national parks as well as a number of unique local attractions. Like Sapporo, this city is laid out in a grid pattern, so it is very easy to navigate.

Located a short walk to the north of Obihiro Station, Kita-no-Yatai is a narrow alleyway packed with 20 tiny eateries, each with its own special atmosphere and menu. Here you will find casual izakaya style taverns, lively restaurants serving French, Chinese, and Korean food, as well as local Japanese cuisine such as obanzai side dishes, yakiniku grilled beef, and kushiyaki kebabs.

Three major attractions are located in Midorigaoka Park in central Obihiro. Obihiro Centennial Hall is a museum in the northern part of the park which has displays covering local natural history, archaeology, the culture and history of the indigenous Ainu people, the history of the Tokachi area’s industries and farming pioneers. This museum is a 15 minute bus ride from Obihiro Station or 10 minutes by taxi.

Obihiro Museum of Art is located in the center of the park modern and displays a dynamic collection of modern and contemporary art featuring both regional and international artists and including paintings, prints, posters, and photography. Both the Centennial Hall and the Museum of Art are open from 9.30 – 17.00 (with last entry at 16.30). They are both closed on Mondays (unless Monday is a national holiday when they are closed the following day instead) and between December 29th to January 3rd.

Obihiro Zoo is located in the southern end of Midorigaoka Park. A wide variety of animals are on show here which include tigers, giraffes, kangaroos, flamingoes, seals, chimpanzees, and American bison. In the center of the zoo there is also an amusement park with several rides and attractions including a Ferris wheel, merry-go-round, go-karts, and a miniature steam train. Open every day, the zoo is a 10 minute taxi ride from Obihiro Station or 16 minutes by bus. Opening hours change seasonally.

Obihiro Racecourse (Obihiro Keibajo) is dedicated to Banei horse racing, a unique type of horse race in which large draft horses pull heavily weighted sleds along a 200 meter track which includes obstacles such as two low hills and a stretch of sand. This is the only surviving race track dedicated to this sport. Close by the racecourse is the Obihiro Horse Museum where you can learn more about the history of this race and the importance of horses to Hokkaido’s agricultural development. The racecourse is a 10 minute bus ride or 7 minutes by taxi from Obihiro Station.

Obihiro has a couple of special attractions for railway fans. Kofuku Station is a former railway station that was officially closed in 1987, but which has been preserved as a popular sightseeing location. The reason for this station’s popularity is its name which literally means “Happiness Station”. On the track beside the station platform two old diesel railway carriages and an antique railway snowplow are on display. There is also a souvenir shop close by the old station building selling railway themed memorabilia. Kofuku Station can be accessed from Obihiro Station in around 40 minutes by bus and 30 minutes by taxi.

Aikoku Station is another former station building which has been preserved as a small museum and which has a JNR Class 9600 steam locomotive on display. This station is popular with both couples and patriots as its name literally means “Love Country Station”. It is a 30 minute bus ride or 20 minutes by taxi from Obihiro Station. Both Kofuku Station and Aikoku Station are free to enter.

Located to the north of Obihiro, Tokachigawa Onsen is hot spring spa resort which is a 20 minute taxi ride from Obihiro Station. Located on a peat moor these springs have a high botanical mineral content that has a moisturizing effect on the skin and is also said to be beneficial for muscle pain, stiff joints, general fatigue, and allergies. Drinking the waters is also believed to be good for certain digestive problems and liver disease. Tokachigawa Onsen Daiichi Hotel is a popular resort hotel here with a variety of indoor and outdoor baths overlooking the natural scenery In addition the hotel has five restaurants, a bar, a bakery, a karaoke room, an aromatherapy salon, souvenir shops, and a kids’ play room. Hotel guests can access this hotel from Obihiro Station via a free shuttle bus service. For a fee day trippers can also use the hotel baths without having to stay overnight.

If you want to escape into the countryside, Lake Shikaribetsu in Daisetsuzan National Park can be accessed by bus from Obihiro Station in around 1 hour and 40 minutes or by car in 1 hour and 10 minutes. Popular activities in this area include camping, hiking, canoeing, fishing, horseback trekking, and winter dog sled tours. Between January and March each year the lake freezes over and a village of igloos and other structures built of ice and snow are built upon the lake. This event is called Shikaribetsu Kotan and features cafes, bars, outdoor hot spring baths, as well as activities such as snow mobile tours and ice carving workshops. There is a small hot spring resort on the west side of the lake called Shikaribetsu Kohan Onsen. Hotel Fusui is a popular spa resort hotel here which features lake view rooms, indoor and outdoor mineral baths, and a restaurant serving the finest traditional Japanese cuisine. 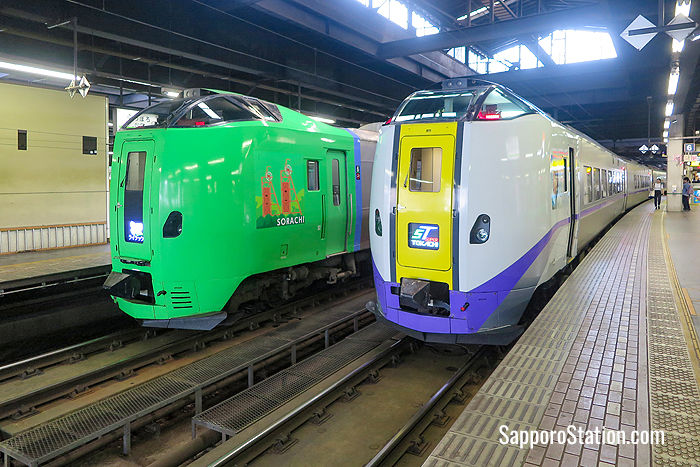 The Tokachi is a four-car KiHa #261 series tilting train. This train has two cars of reserved seating, one non-reserved car, and one Green Car with 1st class seating. There are luggage storage areas in all cars and the train is non-smoking throughout. In addition to regular toilets, there is a multi-purpose restroom in Car 1, and a barrier-free restroom for wheelchair users in Car 2.

To plan your journey on this route use the timetable and route finder and the downloadable route map that can be found on the official JR Hokkaido English language website.