Sapporo Streetcar is a tram network in Sapporo that runs in a loop in the city’s central Chuo ward. This streetcar network is operated by Sapporo City Transportation Bureau, which also operates the city’s subway system. There are several streetcar stops where you can transfer to the subway. 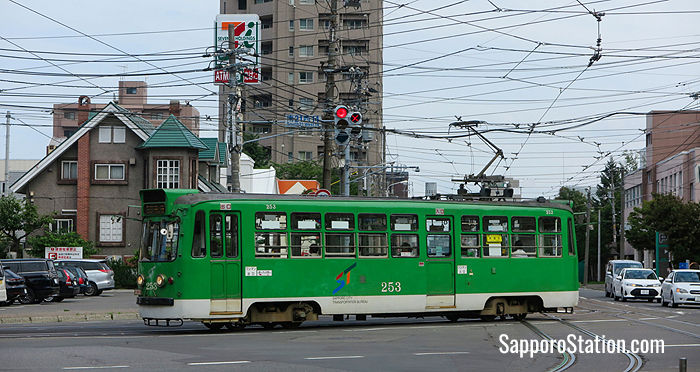 The Sapporo Streetcar network is 8.9kms long and it would take around 55 minutes to complete the loop on a single tram ride. The trams run from around 6:00 in the morning to around 23:00 at night and are very regular, running at roughly 7 minute intervals during the daytime. Although the streetcar network is relatively limited in the area it covers, riding one of the trams is a pleasant way to explore central Sapporo, and there are several locations of interest on its route. 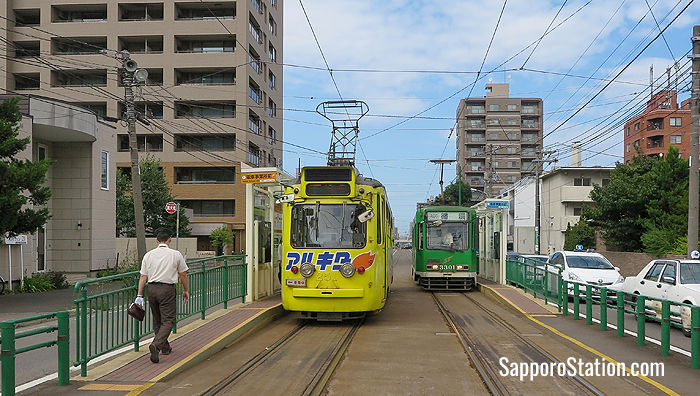 Two trams at a station

The key destinations on this circuit are given below with example journey times given from Nishi-Yon-Chome Station. Travel times are given on the outer (clockwise) loop until Densha-Jigyosho-Mae Station, after which it is faster to travel on the inner (counterclockwise) loop. 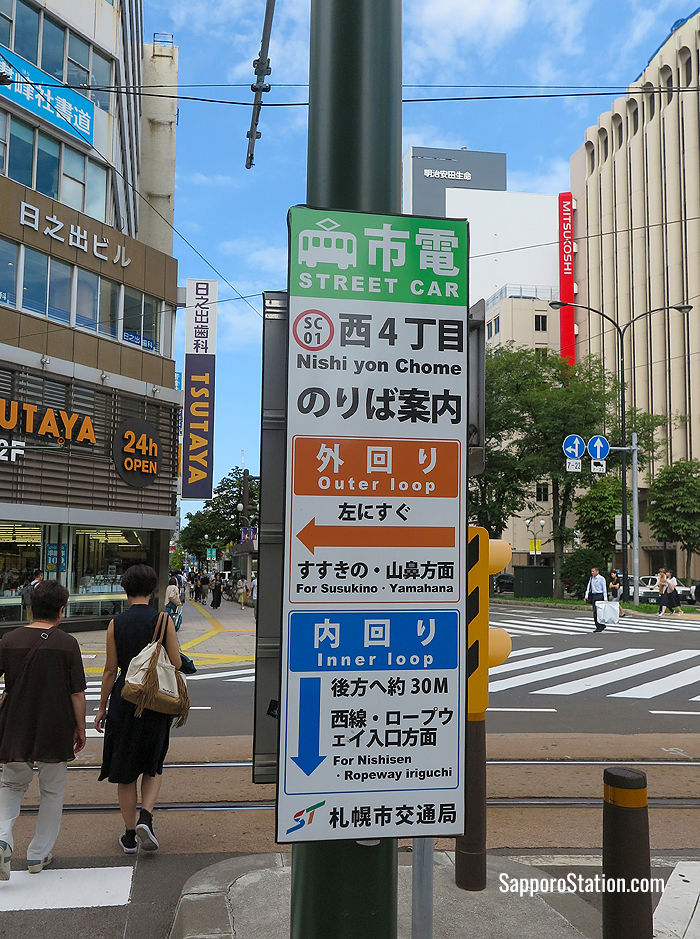 Signs tell you which loop you are on

This station serves the Odori shopping district and is convenient for the Marui Imai, and Parco department stores, Daimaru Fuji Central stationery store, and the Maruzen & Junkudo bookstore. This station is also close to Odori Park, which is one of the locations for the Sapporo Snow Festival each February when it is filled with giant snow statues. Other events held in the park include a Lilac Festival in May and beer gardens during the summer. Sapporo TV Tower is located inside the park and has charming views over the area from its observation deck. The tower is an 8 minute walk from Nishi-Yon-Chome Station.

This stop is convenient for Odori Station on the Namboku, Tozai, and Toho subway lines. 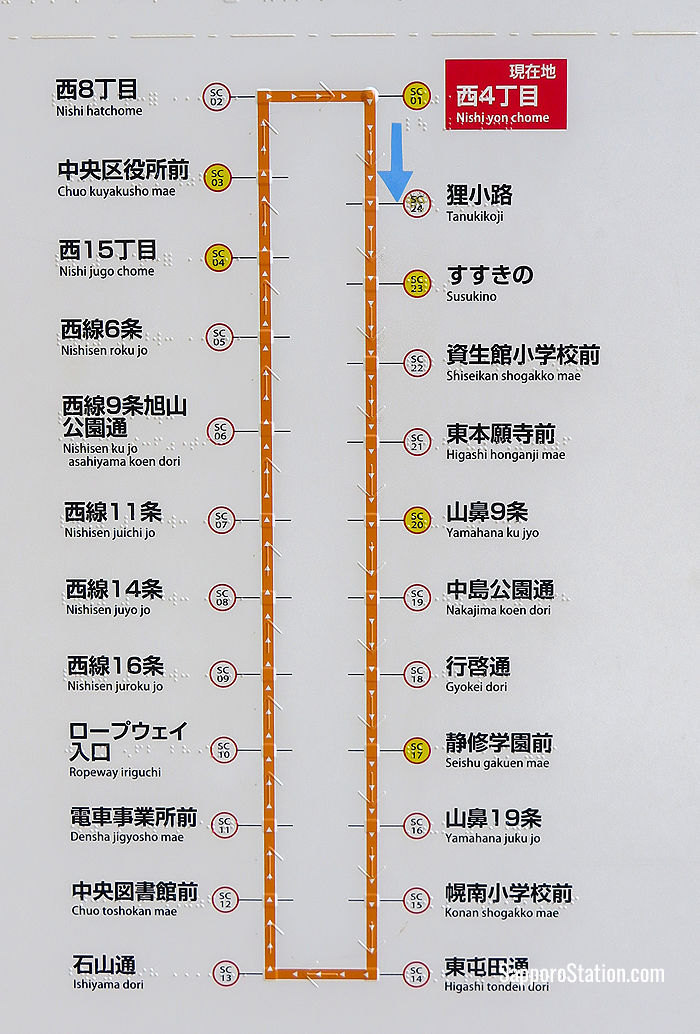 This station gives direct access to the Tanukikoji Shopping Arcade. This 1km long shopping street is over 150 years old and is roofed so that you can continue shopping even when it rains. Inside are a great range of clothing stores, restaurants, pharmacies, traditional sweet shops, Japanese tea shops, and other specialist souvenir stores.

Susukino is Sapporo’s entertainment and nightlife district and is packed with restaurants, bars, and dance clubs. During the Sapporo Snow Festival this area is decorated with delicate ice sculptures. Two popular locations near this station are Ganso Ramen Yokocho and Shin Ramen Yokocho: two alleyways which are full of ramen noodle shops. Here you can try many different flavors of Sapporo’s specialty miso ramen noodles. Ganso Ramen Yokocho (“original ramen alley”) is located 2 minutes to the south of Susukino Station and Shin Ramen Yokocho (“new ramen alley”) is located 1 minute to the east.

This stop is convenient for Nakajima-Koen Station on the Namboku Subway Line.

This station is convenient for Nakajima Park. This is a large park which contains spacious lawns, a pond, streams, and around 5,000 trees. There are several facilities inside the park which are a short walk from this station. The Hoheikan is a famous 19th century wooden guesthouse that is now open as a museum and is just 3 minutes from the station. Also nearby are Sapporo Astronomical Observatory, Sapporo Concert Hall, a puppet theater for children, and a traditional Japanese stroll garden.

This station is convenient for the southern entrance of Nakajima Park. Exit here for Sapporo Gokoku Jinja, a pleasant shrine inside the park, which was founded in 1879 and is popular for cherry blossom viewing spot in the spring.

This stop is convenient for Horohira-Bashi Station on the Namboku Subway Line.

Exit here for the Sapporo Train Bureau. The bureau is a tram depot where the city’s streetcars are stored when not in use. Free tours of the bureau are available at regular intervals between 11.00 and 15.00. The tours are given by regular staff members of Sapporo City Transportation Bureau and are only available in Japanese. However, they can tell you all about the history of the streetcar network in Sapporo, and show you many different trams. For more details, read our article Free Tours of Sapporo’s Tram Depot. 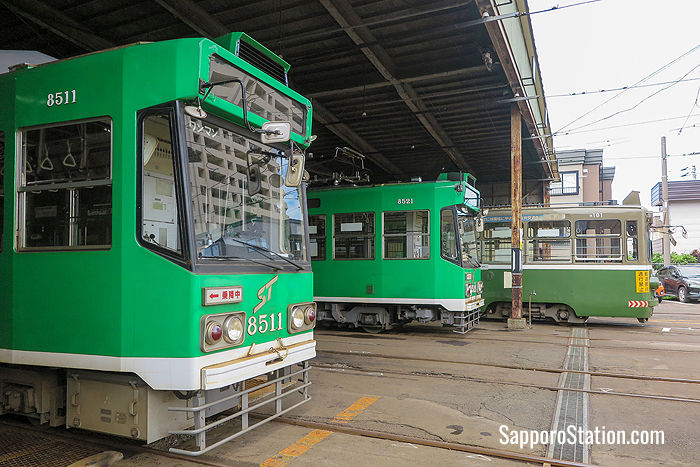 Exit here for Mount Moiwa, which is one of Sapporo’s most popular sightseeing attractions. From Ropeway Iriguchi Station a free shuttle bus runs to Moiwa Sanroku Station on the Mount Moiwa Ropeway. These shuttle buses run every 15 minutes. From Moiwa Sanroku Station you can take the ropeway, and then a cable car, to reach the observation deck on the mountain’s summit. From the top of Mount Moiwa you can enjoy a fabulous view over the city which is particularly impressive at night.

This stop is an 8 minute walk from the main store of Chocolatier Masále where you can buy the very best handmade luxury chocolates.

This stop is a 2 minute walk from Space 1-15, an apartment building that has been converted into an unusual department store. Inside the building 24 apartments have been converted into individual artisanal shops, workshops, and eateries. Most of the shops are open only in the afternoon between Thursday and Sunday. To enter the building, you buzz the intercom button for the shop that you wish to visit first and they will let you in.

This stop is also a 9 minute walk from Hokkaido Museum of Modern Art which exhibits a range of modern and contemporary art works by artists from Hokkaido and overseas. This includes early 20th century works by Jules Pascin and other artists of the School of Paris, a glasswork collection with Art Nouveau items and contemporary works, and 19th century ukiyo-e prints. Also nearby is the Migishi Kotaro Museum which displays the works of local artist Migishi Kotaro (1903 – 1934) who painted in a modern Western style.

This stop is convenient for Nishi-Juhatchome Station on the Tozai Subway Line.

This stop is a 5 minute walk from Sapporo Shiryokan. This building was built in 1926 and was formerly Sapporo’s Court of Appeals. It is now open as a free museum, art gallery and event space.

This stop is also a 2 minute walk from Beer Cellar Sapporo, a craft beer taproom and bottle shop that specializes in new and innovative brews. The store has over 200 bottled beers and 10 beers on tap. Beer Cellar Sapporo is open between Wednesday and Sunday and on national holidays.

This stop is convenient for Nishi-Juitchome Station in the Tozai Subway Line. 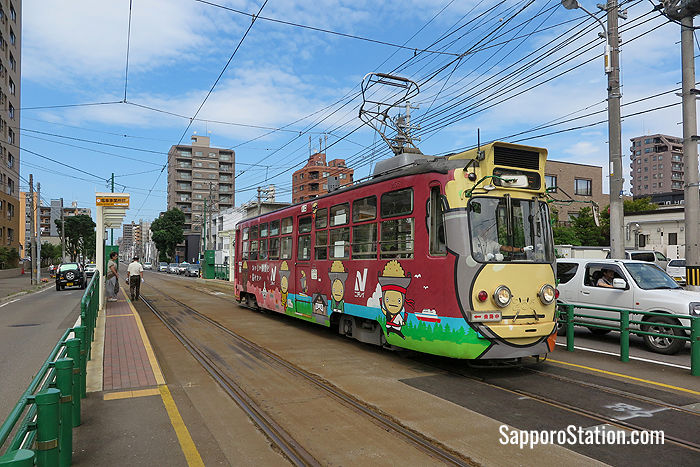 Many trams have colorful advertising

The Dosanko Pass is a cheaper one-day discount pass for the streetcar that is available to use on weekends and national holidays. The Dosanko Pass costs 370 yen and covers all streetcar fares for one adult with one child.

The One-Day Streetcar Pass and the Dosanko Pass can be bought on board a tram, or you can buy them at the ticket counters of the following subway stations: Odori, Susukino, Nakajima-Koen, Horohira-Bashi, Nishi-Juhatchome, Nishi-Juitchome and Hosui-Susukino.

Prepaid IC cards can also be used on the streetcar network. The SAPICA card is the local IC card that can be used on the streetcar, subway, and local bus routes. SAPICA can also be used to buy goods from shops and vending machines in Sapporo that display the SAPICA logo. This card can be bought from subway ticket machines or bus terminal ticket offices. However, it cannot be bought on board streetcars or buses. SAPICA can only be used in Sapporo, but there are other regional IC cards that can be used in Sapporo and throughout the country. The following IC cards can all be used on Sapporo’s streetcar, subway, and local bus networks: Kitaca, Suica, PASMO, manaca, TOICA, PiTaPa, ICOCA, Hayakaken, nimoca and SUGOCA. 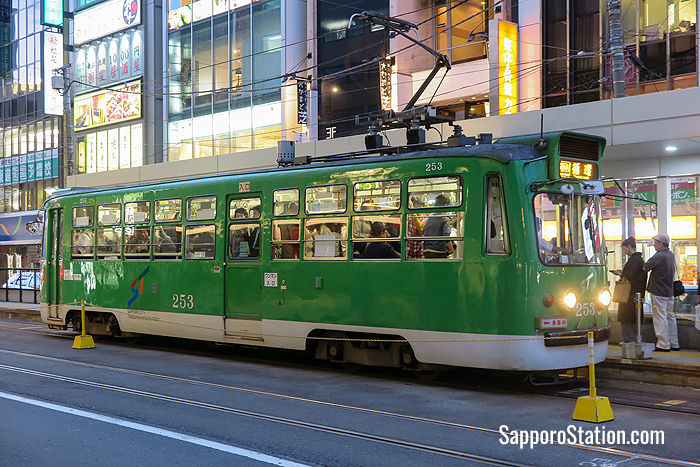 A tram taking on passengers

How to Use the Streetcar in Sapporo

Trams are boarded from the rear door and exited from the front. When you are ready to get off, push the stop button to request a stop. Because the Sapporo Streetcar has a flat fare system, there is no need to buy a ticket. As you exit the tram you can pay with cash, with an IC card, or with a One-Day Pass. If you pay with cash, you put the exact fare into the fare box which is located beside the driver. If you don’t have the exact fare, you can use a change machine beside the fare box. If you use an IC card you simply tap it on the card reader which is located beside the driver. If you use the One-Day Pass, you simply show it to the driver. 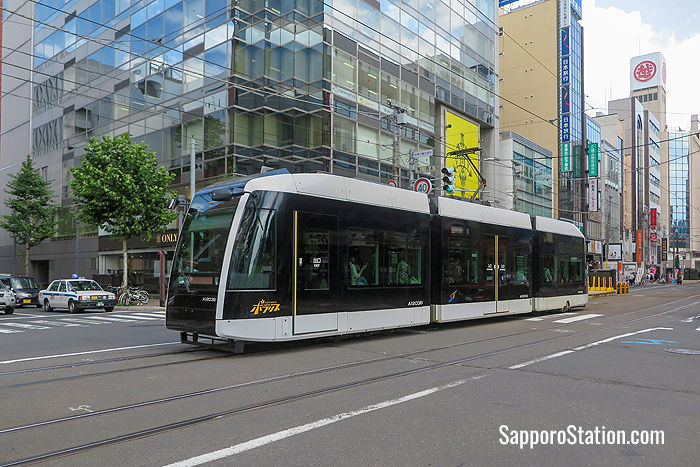 The Polaris is a modern low-floor tram introduced in 2013

A downloadable route map for the Sapporo Streetcar is available from the Sapporo City Transportation Bureau webpage.

To plan your journeys on the Sapporo Streetcar use English language timetable and route searches such as Japan Transit Planner or Hyperdia.