Susukino is Sapporo’s main entertainment area, so many of Sapporo’s best restaurants, bars, cafes, clubs, cinemas, karaoke parlors, and hotels are located here. However, it is also the home of Sapporo’s red-light district with many “adult-entertainment” establishments. For this reason, if you want to avoid any embarrassing experiences, it is a good idea to know exactly where you are going when you visit this area, rather than just wandering around and seeing what you can find. In this article we will focus on attractions unrelated to the red-light industry. 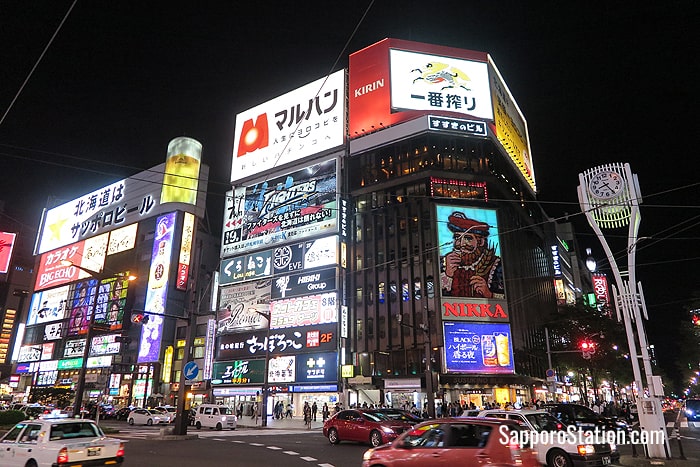 Susukino is not an official area name, so it is hard to say exactly where it starts and ends. However, as you walk south from Odori Park, shopping streets and department stores will gradually give way to buildings filled with restaurants, bars and clubs – all with brightly colored signage. The heart of the district is Susukino Crossing which is located at the intersection of Sapporo Ekimae Street (which runs north to south from Sapporo Station) and Tsukisamu Street (which runs east to west). This intersection is famous for the bright lights of its neon signage among which is the famous Nikka Whisky sign on the Susukino building which is backlit with changing colors. This is a popular photography spot for sightseeing tourists and instagrammers.

Sapporo is famous for its fresh seafood, its miso ramen noodles, and for “Genghis Khan” style lamb barbecue. Some of the best restaurants for these three specialties can be found in Susukino. Below are our recommendations. 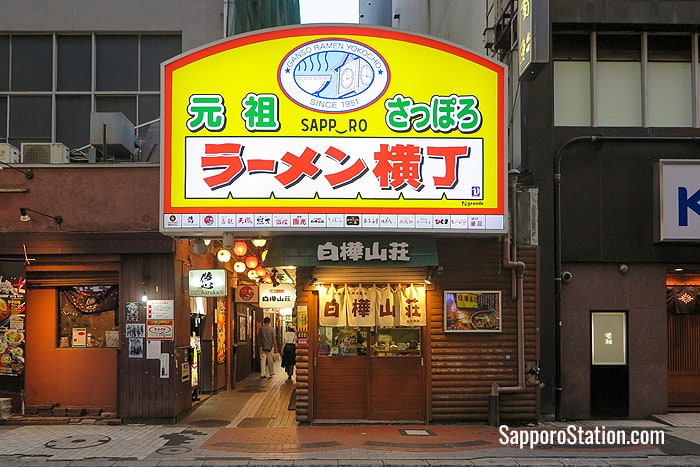 The entrance to Ganso Ramen Yokocho

For sushi, Puku Puku is an izakaya-style casual sushi restaurant just 3 minutes’ walk from Susukino Station with good value all-you-can-eat-and-drink deals. They also have private rooms. Open every day from 15.00 – 22.00. Here is a map of their location.

For crab, try Sekkatei. This crab specialty restaurant is located just 2 minutes from Susukino Station and among many dishes serves delicious fresh snow crabs shabu shabu style. Open everyday (except January 1st – 3rd) from 17.00 – 22.00. Here is a map of their location.

For lamb barbecue try the restaurant Itadakimasu. This restaurant is just 3 minutes south of Susukino Station and takes great pride in its reasonably-priced Hokkaido raised lamb and mutton. Open from 11.30 – 23.00. Closed on Wednesdays. Here is a map of their location. 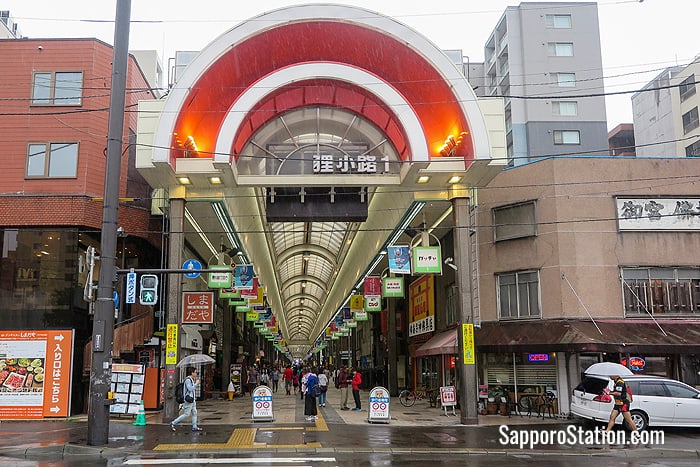 At Odori Station, Pole Town connects with the Aurora Town underground mall which runs east to the Marui Imai department store and to Sapporo TV Tower. It also connects here to the underground walkway that runs north all the way to Sapporo Station. Although this underground network is convenient on rainy days, walking the full distance between Sapporo Station and Susukino Station will take around 20 minutes. 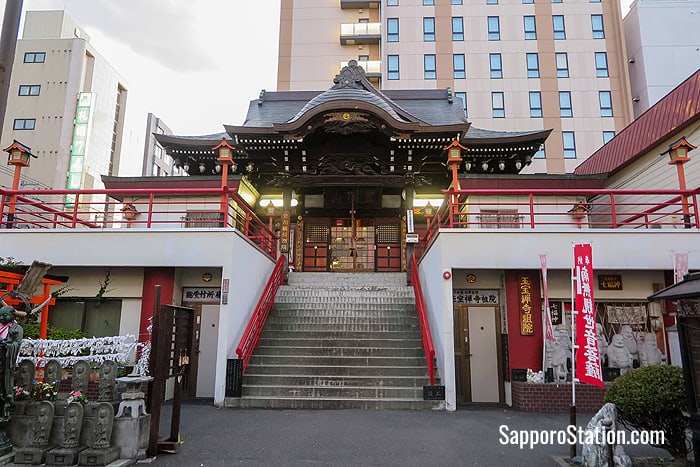 The official name of the temple is Toyokawa Inari Sapporo Betsuin. Betsuin means it is a sub-temple of the original Toyokawa Inari Temple which is a major Soto Zen temple in the city of Toyokawa, Aichi Prefecture. At both of these temples Inari, the Shinto god of rice, is worshipped together with Dakini, a Buddhist guardian goddess associated with wealth and prosperity. This makes the temple very popular with local business owners. Perhaps because Dakini is a goddess, this temple is also very popular with the women who work in Susukino. 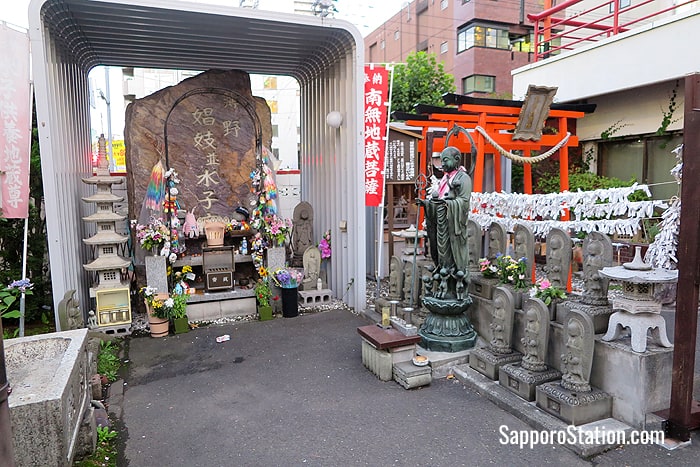 Although, the god Inari is usually associated with Shinto Shrines, until the late-19th century the Shinto and Buddhist religions were mixed. The Japanese government forced the two religions to separate during the Meiji era (1868-1912), so the Toyokawa Inari temples are a rare example of Buddhist temples that have retained some Shinto influences. There are many different statues around the temple including those of the Seven Lucky Gods, Jizo the guardian of children, and Kannon the goddess of mercy. You will also see fox statues at this temple because these animals are believed to be the messengers of Inari, and images of Dakini also usually show her riding a white fox. 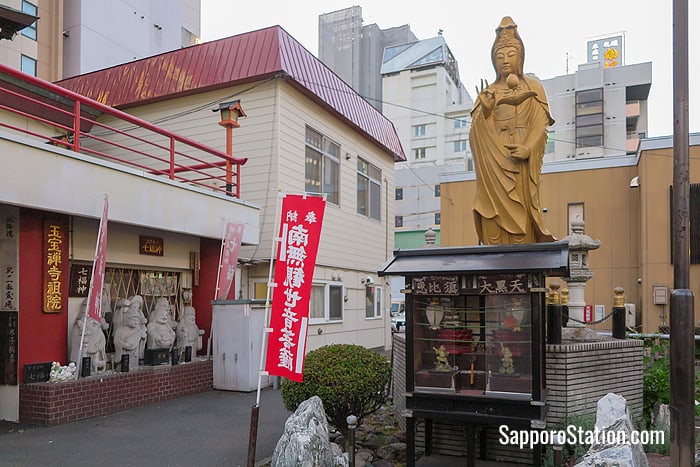 A statue of Kannon, the Buddhist goddess of mercy, and below her a small shrine to the lucky gods Ebisu and Daikokuten

The Sapporo branch of this temple was built in the late 19th century thanks to efforts of a local sake brewer, Hatano Yosaburo. Hatano had deep connections with the hanamachi or “flower district” of Susukino and so was able to raise funds from local business such as geisha tea houses, restaurants, and theaters. Building began in 1895 and the temple was opened in 1898. The names of the original donors can still be seen carved on the outside fence and gate posts. 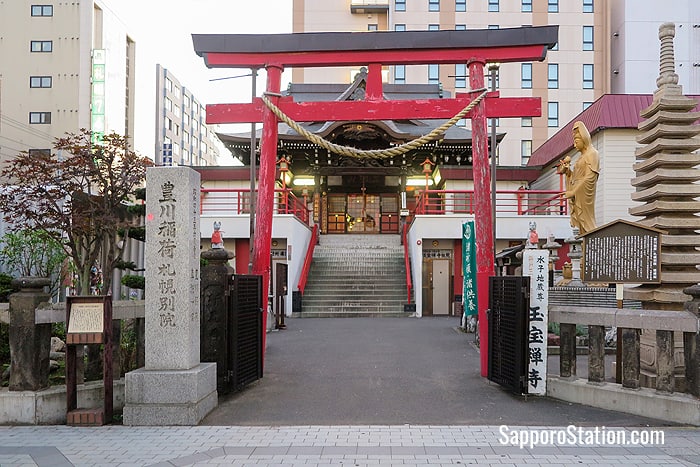 The entrance to the temple

The grounds of this temple are always open. Here is a map showing its location.

Susukino is one of the three main sites for the annual Sapporo Snow Festival along with Odori Park, and the Tsudome Community Dome. This week-long festival takes place each February and during this time around 60 beautifully carved ice sculptures both large and small can be seen along Sapporo Ekimae Street which runs through Susukino. Some of the larger sculptures can be touched or climbed, some sections are illuminated at night, and there is also an outdoor “ice bar” providing hot drinks. Susukino is also the setting for an Ice Queen beauty contest and photo shoot, and for an ice sculpture competition. Ice Sculptures can be seen from the Susukino Station area as far south as Toyokawa Inari Temple. 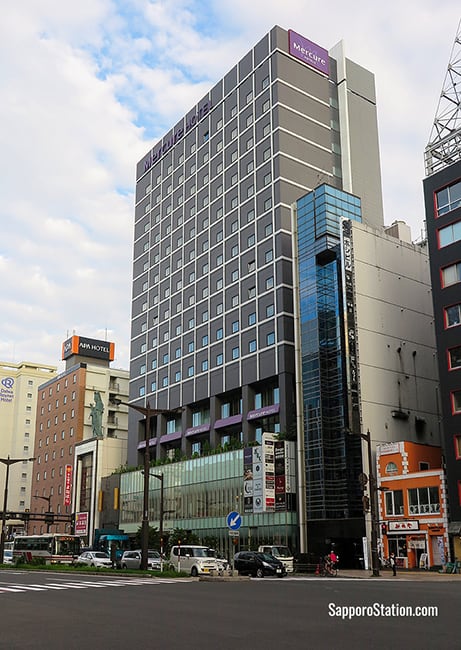 The Mercure Hotel in Susukino