The Seikatei is a historic wooden building located between JR Sapporo Station and the Sapporo campus of Hokkaido University. The name Seikatei literally means “Pure Flower Pavilion”. Although it is a small attraction, it can be easily added to your touring schedule if you plan to explore the nearby university grounds. 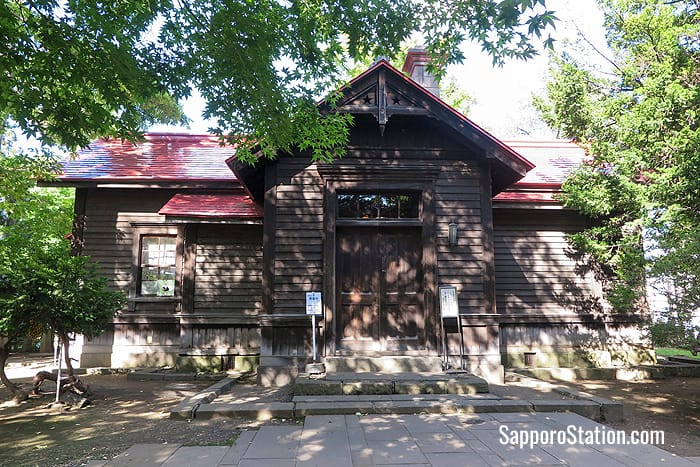 The historic Seikatei: a 19th century fusion of Japanese and Western architectural styles

The History of the Seikatei

The Seikatei was built in 1880 as a rest house for dignitaries who were visiting Sapporo. The building was given the name Seikatei by Kiyotaka Kuroda who was the head of the Hokkaido Development Commission at that time. Kuroda would later become Japan’s second Prime Minister. 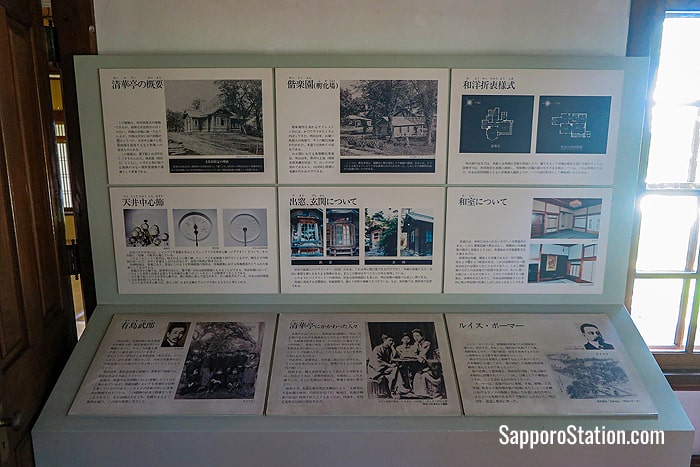 Unlike many of the other historic buildings in Sapporo, the Seikatei has not been moved from its original location. However, although the Seikatei has stood in exactly the same spot for 140 years, the area around it has changed a lot. At that time the area around the house was a large open park called Kairakuen (a name which means “garden to enjoy together”). Kairakuen Park was Sapporo’s first public park and it was intended for the enjoyment of Sapporo’s citizens, but it also served as a testing ground for various agricultural trials, and included a salmon hatchery, and facilities for industrial exhibitions too. Only a small scrap of this park now remains, but there is a memorial stone commemorating it located just to the south of the Seikatei. Inside the Seikatei you can see a diorama of the Kairakuen Park as it appeared in the 19th century. 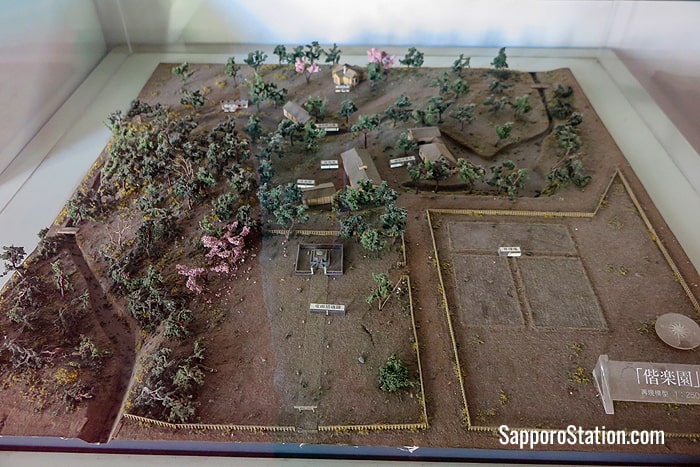 Around the Seikatei a garden was also designed by the German-American agricultural expert, Louis Boehmer who was working in Sapporo as an advisor at that time. It was Boehmer who first suggested the establishment of a beer brewery in Sapporo and he also designed the garden for the Hoheikan hotel (now located in Nakajima Park). Sadly both of Boehmer’s original gardens for the Seikatei and for the Hoheikan have now disappeared. 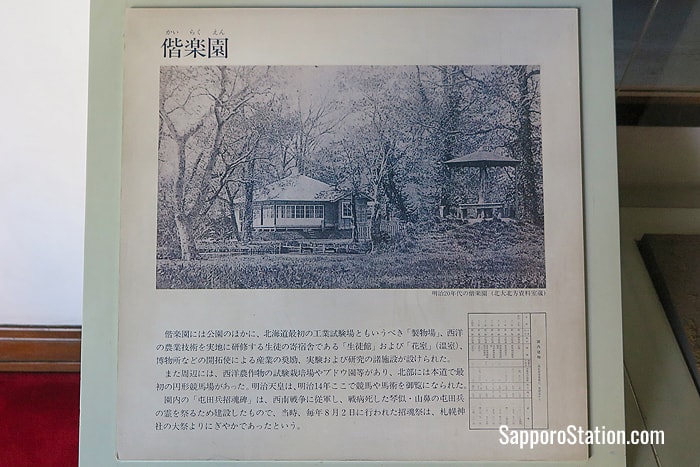 A photograph displayed in the Seikatei showing Kairakuen Park in 1887

In 1897 the Seikatei was sold to a private company and for some years it was used as a restaurant and event space. In the 1920s a group of citizens called for the building to be preserved as a sacred location because of its association with the Emperor Meiji. This group purchased the property and donated it to the city in 1933. At that time the Seikatei was nationally designated as an “Imperial Resting Place”, but this designation was lifted in 1948 and for a short time after that the building was used as a residence for city employees. However, as the Seikatei’s 100th anniversary approached in the late 1970s, the building was fully renovated and restored to its original appearance. 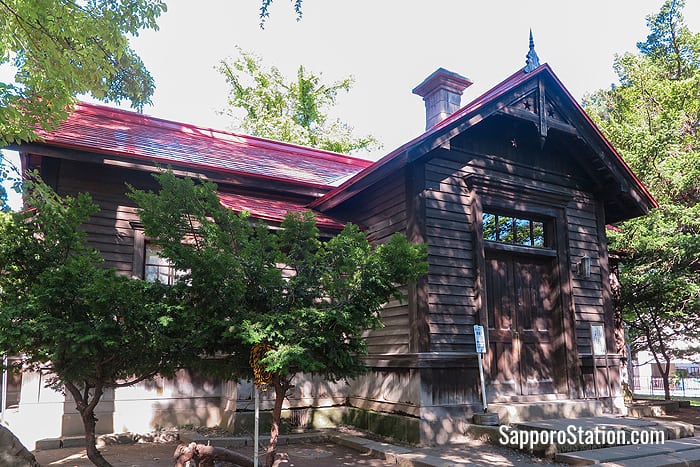 The entrance to the Seikatei today. The property is left open so that visitors can simply walk in

Today the Seikatei is a well-preserved example of Hokkaido’s historic development, and it is also important because it represents an early success in combining Western and Japanese architectural design principles. For these reasons the Seikatei was designated as one of Sapporo city’s Tangible Cultural Properties in 1961.

The Seikatei is a small wooden single-story house surrounded by trees and at first sight it has the appearance of a fairy tale cottage in the woods. Although its outward appearance is that of a Western style building, on the inside it has a mixture of Japanese and Western style rooms.

The five-pointed stars under the eaves of the Seikatei

Under the eaves of the Seikatei are the five-pointed stars that represent the Pole Star and Sapporo’s pioneer spirit. These five-pointed stars can also be seen on other 19th century buildings that were built by the Hokkaido Development Commission in Sapporo such as the Sapporo Clock Tower and the Hoheikan. The Pole Star also remains as the brand logo for Sapporo Breweries, Japan’s oldest brand of beer, which was established in Sapporo just four years before the Seikatei was built. 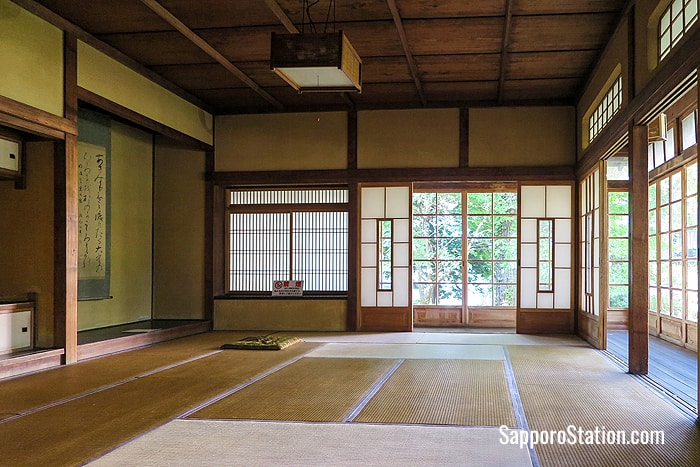 A Japanese style room inside the Seikatei

The Seikatei is free to enter and usually has no staff on the premises during its opening hours. You can simply walk into the building and explore its interior. Inside there are various historical photographs on display, which illustrate the history of the building and Kairakuen Park, as well as various architectural and interior design features. However, the accompanying information is only written in Japanese, so you will need a Japanese guide or friend to interpret for you if you cannot read it yourself. Even so, the location is very quiet, the interior rooms have been very well preserved, and it is pleasant to view the garden greenery from the large windows of the house. 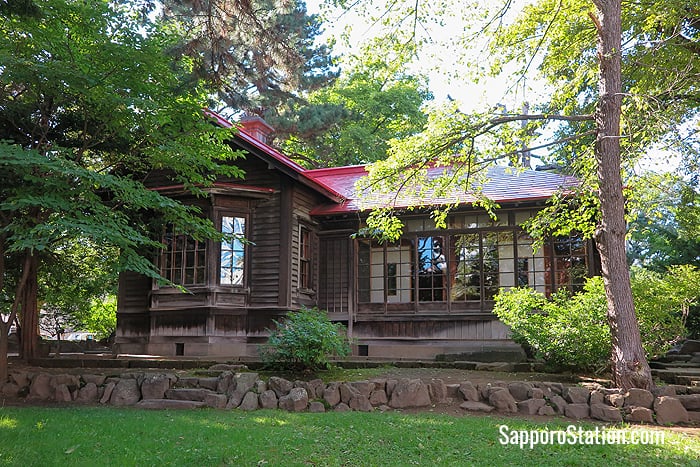 A side view of the Seikatei from the garden

The Seikatei can be accessed on foot in 7 minutes from the north side of JR Sapporo Station. It is also convenient for the campus grounds of Hokkaido University. Here is a map showing its location.